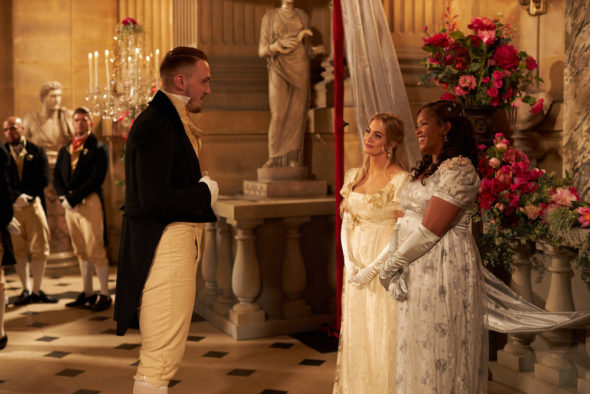 NBC’s newest dating reality series has been dumped. The Courtship has been pulled off the peacock network’s schedule effective immediately and will complete its season on USA Network.

A dating reality series, The Courtship TV show is presented by Rick Edwards. In the series, a heroine looking for her duke signs up for a social experiment in romance. Transported to a Regency-style England, a group of eligible hopeful suitors attempts to win the heart of a heroine and her court. Housed in a castle in the countryside, set on a backdrop of beautiful rolling hills, the heroine and suitors experience that with which dreams are made. From carriage rides and boat rides on the lake to archery and handwritten letters as a way to communicate, the participants are immersed in a time-traveling quest for love. The lead of the first season is Nicole Remy and her court is made up of parents Claude Remy and Dr. Claire Spain-Remy, sister Danielle “Danie” Baker, and best friend Tessa Cleary. Nicole’s suitors are Daniel Bochicchio, Giuseppe Castronovo, Lincoln Chapman, Christian Lee Cones, Lewis Echavarria, Jaquan Holland, Daniel “Dan” Hunter, Derek Kesseler, Danny Kim, Alex “Achilles” King, Chandler “Chan” Luxe, Charlie Mumbray, Peter Saffa, Jarrett Schanzer, Nate Shanklin, and Caleb Ward.

Airing on Sunday nights, The first season of The Courtship has been drawing terrible ratings. The two episodes have averaged a 0.14 rating in the 18-49 demographic and 806,000 viewers in the live+same day ratings (including DVR playback through 3:00 AM). That may be a new all-time low for a major broadcast network.

The first episode of The Courtship will be rerun tonight on USA Network at 11:00 PM, following the fourth season premiere of Temptation Island. A repeat of the second installment will air new Wednesday and new episodes will begin airing on March 30th.  Episodes will continue to be released on Peacock the day after their cable airing.

While it seems clear that The Courtship has been effectively cancelled by NBC, if the show does well for USA Network and the Peacock streaming service, it is possible that it could get a second season on one of those outlets.

What do you think? Have you watched The Courtship TV series on NBC? Will you continue to watch on USA or Peacock? Are you hoping that this reality series gets a second season?

Well, seeing as I am basically a Victorian woman trapped in the present, I absolutely love this show. It’s EXACTLY what the world needs right now. Let’s rewind the tape back to when chivalry was required.

Patience is golden when it comes to love. These days, people jump into bed so fast. You have to get to know the cake before you eat the frosting. You’re going to be living with the cake. 🙂

I love everything about the show – the interior design (I’m a designer), the costumes, the people, the scenery, the premise, all of it!

I think this show is a breath of fresh air. I love reality shows but so many are nothing but drama, this one is sweet, polite, and I love Remy and her family. It’s about common courtesy, something this world lacks a lot of. I hope a 2nd season is picked up. I know it had low ratings, but I also think there needs to be better advertising for it so it doesn’t look cheesy, that will turn people off. I hope Ms. Remy finds a gentleman and true love!

I love this show! It’s really sweet and a cute format. Please keep it!

Nicole Remy is a beautiful woman with a wonderful personality and loads of chemistry with each male suitor.

Nicole Remy is very beautiful and has charisma and chemistry with even the dullest man on the show. If a woman can make a bland guy seem interesting that’s saying a lot about her personality. She seems so easy to get along with and her parents, sister, and friend all seem pleasant to be around. I fear the 1800 period decision was a major fail because I think some people find it hard to relate to that era with romanticism between bw/wm because it was labeled taboo and no one talked about it. We barely (in this era) have movies… Read more »

Deadly dull ! Female star has no presence and limited maturity/judgment.

Don’t think we are watching the same show, she definitely has a lot of presence, maturity and charisma. Smh

Right! She’s a breath of fresh air. I loved that she really wanted to get to know each of the men on a personal level. When you compare this to the Bachelor and Bachelorette? Most of those people unfortunately lack maturity and show little respect for themselves or for the others on the show. (Of course, not everyone on that show is catty, but a lot of them are) I also loved that her family had a larger role. In real life, you would want your potential spouse to have more time with your family and or close friends. We… Read more »

I realize though that Pride and Prejudice is Georgian era, but also had some beautiful dresses!