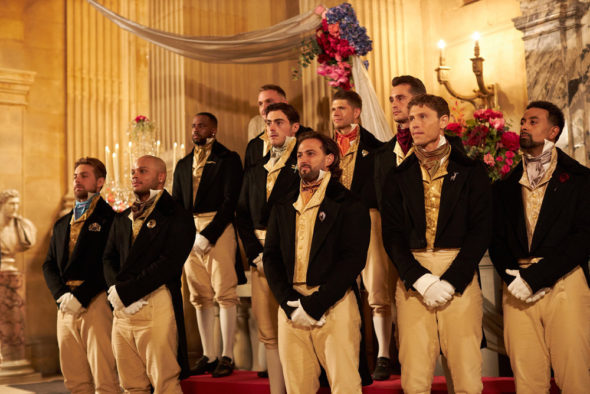 Is the Regency era as romantic as it seems? Has The Courtship TV show been cancelled or renewed for a second season on NBC? The television vulture is watching all the latest cancellation and renewal news, so this page is the place to track the status of The Courtship, season two. Bookmark it, or subscribe for the latest updates. Remember, the television vulture is watching your shows. Are you?

Starting on the NBC television network, The Courtship TV show is presented by Rick Edwards. In the series, a heroine looking for her duke signs up for a social experiment in romance. Transported to a Regency-style England, a group of eligible hopeful suitors attempts to win the heart of a heroine and her court. Housed in a castle in the countryside, set on a backdrop of beautiful rolling hills, the heroine and suitors experience that with which dreams are made. From carriage rides and boat rides on the lake to archery and handwritten letters as a way to communicate, the participants are immersed in a time-traveling quest for love. The lead of the first season is Nicole Remy and her court is made up of parents Claude Remy and Dr. Claire Spain-Remy, sister Danielle “Danie” Baker, and best friend Tessa Cleary. Nicole’s suitors are Daniel Bochicchio, Giuseppe Castronovo, Lincoln Chapman, Christian Lee Cones, Lewis Echavarria, Jaquan Holland, Daniel “Dan” Hunter, Derek Kesseler, Danny Kim, Alex “Achilles” King, Chandler “Chan” Luxe, Charlie Mumbray, Peter Saffa, Jarrett Schanzer, Nate Shanklin, and Caleb Ward.

The first season of The Courtship averaged a 0.06 rating in the 18-49 demographic and 228,000 viewers in the live+same day ratings (including DVR playback through 3:00 AM). The first two episodes aired on NBC with the rest airing on USA Network. While these numbers don’t include further delayed or streaming viewing, they are a very good indicator of how a show is performing, especially when compared to others on the same channel. There can be other economic factors involved in a show’s fate, but typically the higher-rated series are renewed and the lower-rated ones are cancelled.

Will NBC cancel or renew The Courtship for season two? TV viewers love a dating reality series and this one seems tailor-made for romantics. However, the ratings have been terrible for a major network series. I think it will be cancelled and will be pulled off the air soon. I’m guessing the final episodes will be released on Peacock. I’ll update this page with breaking developments. Subscribe for free alerts on The Courtship cancellation or renewal news.

3/16/2022 update: NBC has dropped the show and it’s been moved to USA Network. It hasn’t been cancelled but a second season renewal appears doubtful.

What do you think? Do you hope that The Courtship TV show will be renewed for a second season on USA Network? Are you sorry that NBC dropped this TV series?

I loved it and could not wait to see it again every week!!