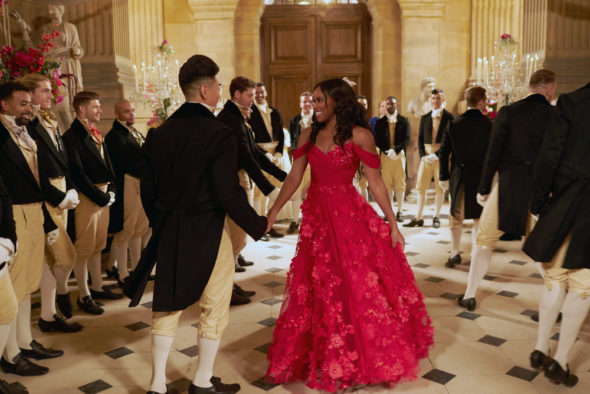 Will Nicole find love in the first season of The Courtship TV show on NBC? As we all know, the Nielsen ratings typically play a big role in determining whether a TV show like The Courtship is cancelled or renewed for season two. Unfortunately, most of us do not live in Nielsen households. Because many viewers feel frustrated when their viewing habits and opinions aren’t considered, we invite you to rate all of the first season episodes of The Courtship here. *Status update below.

An NBC dating reality series, The Courtship TV show is presented by Rick Edwards. In the series, a heroine looking for her duke signs up for a social experiment in romance. Transported to a Regency-style England, a group of eligible hopeful suitors attempts to win the heart of a heroine and her court. Housed in a castle in the countryside, set on a backdrop of beautiful rolling hills, the heroine and suitors experience that with which dreams are made. From carriage rides and boat rides on the lake to archery and handwritten letters as a way to communicate, the participants are immersed in a time-traveling quest for love. The lead of the first season is Nicole Remy and her court is made up of parents Claude Remy and Dr. Claire Spain-Remy, sister Danielle “Danie” Baker, and best friend Tessa Cleary. Nicole’s suitors are Daniel Bochicchio, Giuseppe Castronovo, Lincoln Chapman, Christian Lee Cones, Lewis Echavarria, Jaquan Holland, Daniel “Dan” Hunter, Derek Kesseler, Danny Kim, Alex “Achilles” King, Chandler “Chan” Luxe, Charlie Mumbray, Peter Saffa, Jarrett Schanzer, Nate Shanklin, and Caleb Ward.

What do you think? Which season one episodes of The Courtship TV series do you rate as wonderful, terrible, or somewhere between? Do you think that The Courtship should be cancelled or renewed for a second season on NBC? Don’t forget to vote, and share your thoughts, below.

*3/16/2022 update: NBC has dropped the show and it’s been moved to USA Network. It hasn’t been cancelled but a second season renewal looks very doubtful.

Didn’t like it at all. Seemed too pre pland.