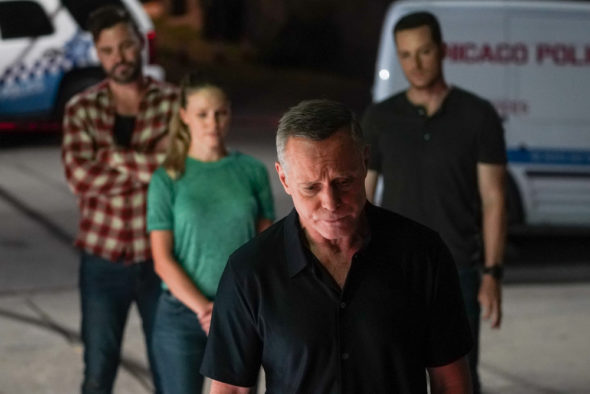 What new cases will test Voight and his team in the ninth season of the Chicago PD TV show on NBC? As we all know, the Nielsen ratings typically play a big role in determining whether a TV show like Chicago PD is cancelled or renewed for season 10. Unfortunately, most of us do not live in Nielsen households. Because many viewers feel frustrated when their viewing habits and opinions aren’t considered, we invite you to rate all of the ninth season episodes of Chicago PD here.

What do you think? Which season nine episodes of the Chicago PD TV series do you rate as wonderful, terrible, or somewhere between? Are you glad that Chicago PD has been renewed for a 10th season on NBC? Don’t forget to vote, and share your thoughts, below.

I love Chicago PD! If I had to pick one this would be it!! Don’t change any of the characters I love them all, each are unique in their own way and have their own story to tell! Keep up the excellent work, and keep our favorite show going!

I happened on this show by accident and had to Binge watch to get caught up to the present. Jason Beghe really is one of the best actors and he really makes the show work. I will tell you now that I miss Sophia Bush she helped to make this show what it was I’m just not fond of Tracy Spiridakos she doesn’t hold a candle to Sophia Bush. Here is another actress that could be replaced Marina Squerciati maybe you could bring forward Carmela Zumbado to take her place. Another one I hope finds her walking papers is Samantha… Read more »

Amazing show! I love this as well as Chicago Med and Chicago Fire

I watch all the Chicago’s med fire and PD. I love them all. I would be very upset if they ended any of them right now. Please bring all 3 back for another season and please stay on tv.

I love ALL the Chicago PD shows. I can’t really just pick one. All the characters play such an important role in the show and it makes it seem so real.

Loved it since it started!

I love Chicago P.D. I love the fact that despite how much more bad there is than good Hank Bought is still willing to do whatever it takes to protect the innocent. There’s an old saying about doing whatever it takes to protect what you love most. Voight truly lives that. I’m going to use a country sounding term, he’s not afraid of going into the muck to flush out the vermin. If I ever did have to call the cops I would want a cop like Voight to handle my case, because he would fight like hell for me… Read more »

why is the FBI so concerned with how Roy died?
Be thankful that psycho is dead

I agree with that!!