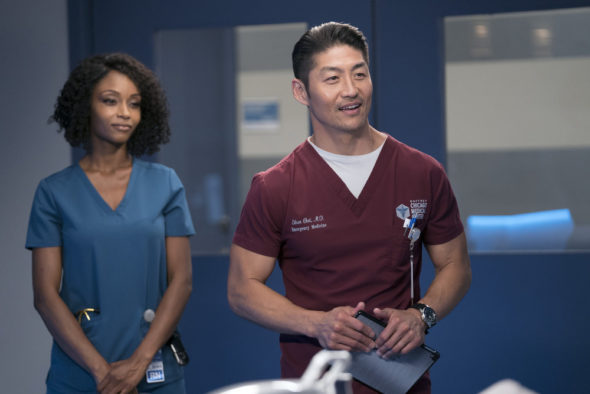 Are these doctors still “in” in the fifth season of the Chicago Med TV show on NBC? As we all know, the Nielsen ratings typically play a big role in determining whether a TV show like Chicago Med is cancelled or renewed for season six. Unfortunately, most of us do not live in Nielsen households. Because many viewers feel frustration when their viewing habits and opinions aren’t considered, we invite you to rate all of the season five episodes of Chicago Med for us here. *Status update below.

What do you think? Which season five episodes of the Chicago Med TV series do you rate as wonderful, terrible, or somewhere between? Should NBC cancel or renew Chicago Med for a sixth season? Don’t forget to vote, and share your thoughts, below.

i tape CHICAGO PD,all the time,i love watching some of the programs over and over,i love the show its great,so i hope they dont cancel it.GREAT SHOW

Curry wants Will, bad. She’s trouble.
Maggie and her husband will give the sick kid a good life!

Chicago Med is a wonderful show with a terrific group of actors. It should be continued.

Bring back Colin Donnell! He was fantastic. Now just so so.

I look forward to all three Chicago med fire and PD programs. Why are they so stupid as to cancel these shows?
Very very disgusted.
Marilyn

Will is wrong. Enabling addicts doesn’t give them a reason to quit

I watch weekly and enjoy . However I think it is the weakest of the 3 Chicago shows. I think the story lines of April and Ethan and of Will and Natalie are becoming a bit boorish. I like all the other characters tho. Bring on the new season and pep it up! I like the medical story lines each week!

Loved it! Sorry to see the male doctor leave but thrilled to see the mumbling female doctor go! She was so hard to understand we had to use closed captioning to see what the heck she said.