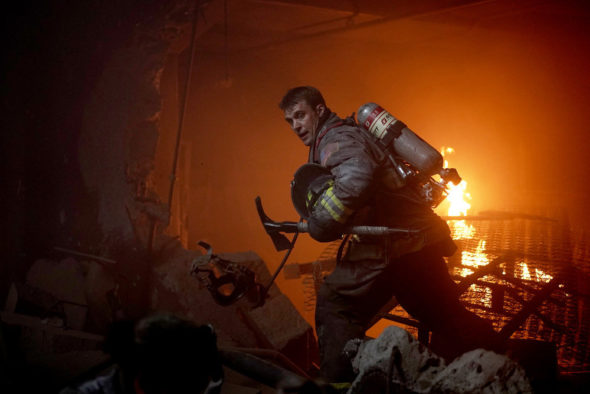 Can things get any hotter on the eighth season of the Chicago Fire TV show on NBC? As we all know, the Nielsen ratings typically play a big role in determining whether a TV show like Chicago Fire is cancelled or renewed for season nine. Unfortunately, most of us do not live in Nielsen households. Because many viewers feel frustration when their viewing habits and opinions aren’t considered, we invite you to rate all of the season eight episodes of Chicago Fire for us here. *Status update below.

What do you think? Which season eight episodes of the Chicago Fire TV series do you rate as wonderful, terrible, or somewhere between? Should NBC cancel or renew Chicago Fire for a ninth season? Don’t forget to vote, and share your thoughts, below.

I love Chicago Fire, Chicago Meds and Chicago P.D. they keep you wanting more and more action. The TV viewers are on pins and needles or crying (myself)you have a great group of actors/actresses please please do not cancel they can run for every. (Well maybe not forever lol).

All three Chicago Shows are excellent!! I like Chicago Fire the best but I watch all three shows as they are very addictive.

please donot cancel CPD BECAUSE OF THE PHENOMENAL ACTING OF JASON BEGHE, HE IS SENSATIONAL AND I WILL BE VERY DISAPPOINTED HE IS ONE OF THE FINEST ACTORS OF OUR TIME I NOT OT

This is one of the best shows on TV along with Chicago PD and Chicago Med.

Chicago Fire is a wonderful show with a terrific group of actors. It should be continued.

If Casey doesn’t ask Brett out, I will!