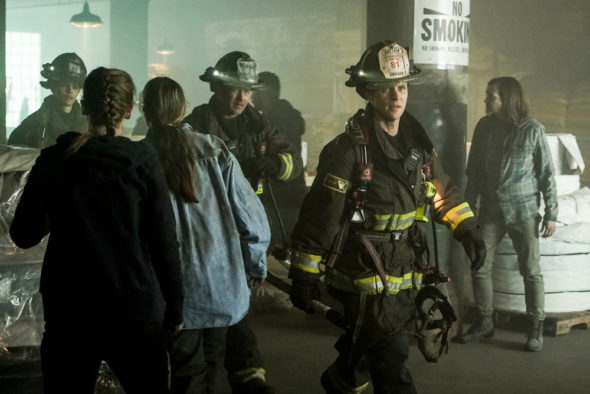 Can this show get any hotter? Has the Chicago Fire TV show been cancelled or renewed for a ninth season on NBC? The television vulture is watching all the latest cancellation and renewal news, so this page is the place to track the status of Chicago Fire, season nine. Bookmark it, or subscribe for the latest updates. Remember, the television vulture is watching your shows. Are you?

The eighth season of Chicago Fire is averaging a 1.17 rating in the 18-49 demographic and 8.18 million viewers. Compared to season seven, that’s down by 3% and up by 1%. Find out how Chicago Fire stacks up against other NBC TV shows.

Will NBC cancel or renew Chicago Fire for season nine? This series is the cornerstone of the peacock network’s successful Chicago line-up. I have no doubt that it will be renewed. I’ll still keep an eye on the ratings and update this page with breaking developments. Subscribe for free alerts on Chicago Fire cancellation or renewal news.

What do you think? Are you glad that the Chicago Fire TV show has been renewed for a ninth season? How would you feel if NBC had cancelled this TV series, instead?

I love, love all the Chicago’s.I wait for Wednesday nightI will not answer my phone from 8 to 11. The best night of the week

All 3 Shows including SVU have been officially by renewed by NBC for 3 seasons.All the way through 2023.

I personally have not been enjoying this season of SVU. Imo, it was a mistake letting Philip Winchester/Peter go. I loved him as ADA and I would prefer that Carisi had remained a detective. I’m just not feeling it with him in Peter nor Barba’s shoes. Barba killed it as ADA,but I wish him well with his new endeavors, but they just didn’t give Peter enough time to show what he could do. Again, that’s jmo.