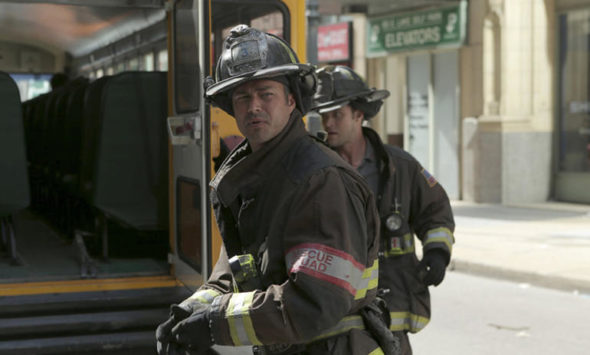 NBC has a burning need for more Chicago Fire. Today, the network announced they’ve renewed the TV show for a seventh season.

Chicago Fire Is Renewed for Season Seven on NBC

Although there’s no press release, the renewal was announced on Twitter. Check it out.


In the words of Stella Kidd, this story is FAR from over. #ChicagoFire returns for Season 7 on @nbc! pic.twitter.com/crU8NFTNnF

While Chicago Fire doesn’t rank as high as its sibling series (Chicago Med and Chicago PD), the show is still a solid performer for NBC. So far, season six is averaging 1.09 rating in the 18-49 demo and 5.981 million viewers.

What do you think? Do you watch the Chicago Fire TV series? Are you glad it’s returning?

When will season 7 start??

Personally think this is one of the best shows on TV. I could watch it everyday!!

Do you know when season 7 will start??

I think Chicago Fire is the BEST SHOW on tv! I personally think it is the BEST of all the three Chicago shows. I am so glad it is returning for a sixth season. I am so sad Monica is leaving the show I hope no one else follows her lead. However I love all three shows.

I agree. Like Chicago PD but truthfully getting old. This one does not.

Everyone moves on. Just don’t let Severide or Casey follow. -:))

THAT IS WONDERFUL, I WATCH ALL THREE OF THE CHICAGO’S, I CAN’T WAIT UNTIL IT COME BACK. PLEASE KEEP CHIEF BODWEN ON.

This is AWESOME news …. this show (and MED and PD ) are the ONLY reason I watch TV otherwise the TV is off.