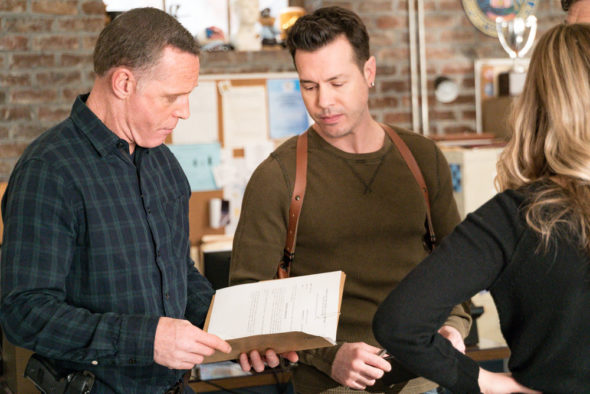 Help is on the way. NBC has renewed its Chicago PD TV show for a sixth season, with a start date TBD. The procedural is the second series (following Chicago Fire) in Dick Wolf’s successful Chicago franchise on the Peacock Network.

In lieu of press releases, this spring, NBC has been announcing some of its renewals on Twitter. Check it out.

Chicago PD: A Look at the Ratings

The fifth season of Chicago PD is averaging a 1.20 rating in the 18-49 demographic and about 6.40 million viewers. Compared to season four, that’s down about 13% and 2%, respectively. In terms of its ratings in the demo, Chicago PD ranks fifth out of the scripted NBC TV shows we are tracking. It rises to third place, when we sort by average total audience size.

What do you think? Are you still watching the Chicago PD TV series? Did you think NBC would cancel or renew it for season six? Sound off, in the comments.

We can veg on Chicago PD, only show I can, please keep renewing it. We also like Chicago Fire.

This show has been my favorite with Chicago Fire. I have to say I’m disappointed. I’m not in law enforcement, but I do know real officers. It’s said every task force has a sniper. I see kills that should never happen. I hope this message hits home.

Sorry , miss sophia bush too much to watch any more……..

what happened to Lindsay Missedd her this last show

Can’t wait until season 6 of Chicago PD! Still hoping Al’s death is a spoof to teach Voight a lesson and that he’ll be back. Still miss the relationship with Voight and Lindsay too. Looking forward to Season 7 of Chicago Fire and Season 4 of Chicago Med. It’s a great series line up and always intriguing. Love SVU as well. Best series line up of today. Dick Wolf is to now as Aaron Spelling was to the 80’s. Great writing, but hope Wolf will stay away from political ramblings. We hear enough of it. Just have good shows and… Read more »

Super show. Can’t wait for the new season to start. Watching reruns right now just to get my Chicago PD Enjoyment. Love all the characters.