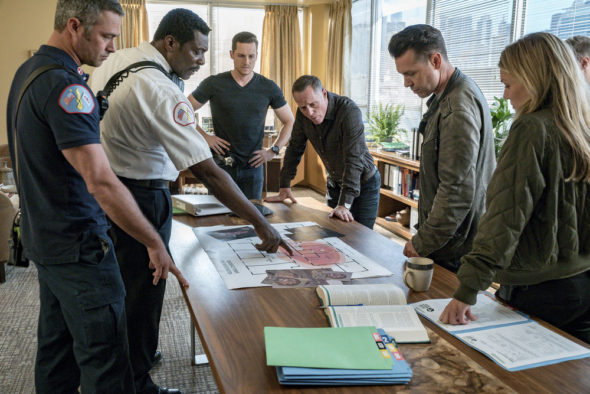 How do Chicago’s finest hold up during the sixth season of the Chicago PD TV show on NBC? As we all know, the Nielsen ratings typically play a big role in determining whether a TV show like Chicago PD is cancelled or renewed for season seven. Unfortunately, most of us do not live in Nielsen households. Because many viewers feel frustrated that their viewing habits and opinions aren’t considered, we’d like to offer you the chance to rate all of the Chicago PD season six for us here. **Status update, below.

An NBC police procedural, Chicago PD stars Jason Beghe, Jon Seda, Jesse Lee Soffer, Patrick John Flueger, Marina Squerciati, LaRoyce Hawkins, and Amy Morton. The Dick Wolf drama centers on the men and women of the Chicago Police Department’s District 21, who pursue the perpetrators of major street crimes in the “Windy City.” Detective Sgt. Hank Voight (Beghe) is at the heart of the war on crime in Chicago and will do anything to bring criminals to justice. This series crosses over with the other shows in the franchise, Chicago Fire and Chicago Med.

What do you think? Which season six episodes of the Chicago PD TV series do you rate as wonderful, terrible, or somewhere between? Should NBC have cancelled or renewed Chicago PD  for a seventh season? Don’t forget to vote, and share your thoughts, below.

I hate to have Chicago PD end. I look forward each week to Chicago PD. Fire and Med. Hope to see it back for another season.

I Love all the Chicago shows! Wednesday is my favorite night of TV!

the best of the best

Watching Hank Voight direct his team is a rollercoaster ride. He is captivating to watch. Smooth as ice. The Best actor in this role. When he lost Al, that scene on the roof of his grief rocked me. I am totally fascinated with him. Now the finale said it all, Hank knew that desperate times calls for desparate measures. Loved it! I have been on a g ood feeling rush from the step that hank took. Loved it. Kelton fini. Yeah! You must protect this unit. Get the officer arrested for obstruction out of jail. Then release the other Mayoral… Read more »

LOVE LOVE JASON BEGHE, WHAT MORE COULD BE SAID ABOUT THIS EXTRAORDINARY ACTOR WHOISTRULY THE HEART OF CHICAGO PD LU REILLY

One of my two most favorite shows! This is one of Dick Wolf’s best cop dramas ever. Awesome cast and lots of action! I’ve watched it from the start and watch the reruns on ION and USA. The One Chicago crossovers are great too. I’m hoping this show will be around for at least a decade or longer. I did hate to see Det. Julia Whillhite (Melissa Sagemiller) and Det.Al Olinsky (Elias Koteas) get killed off. Det. Hailey Upton (Tracy Spiridakos) is a great addition to the cast!

One of the BEST shows on TV. Love all the characters especially Sgt. Voight.

I LOVE this show

Chicago PD is my favorite show. Voight makes the show, and Olinsky was a unique character, unlike the rest, so it’s truly missing something without him. Bring him back! Erin Lindsey leaving was a blow to the show because of the bond she had with voight. Need to find a new actress to play her part or bring another character in to build a bond with voight, like maybe Benson from SVU, or maybe when her son Noah grows up he can join Hanks team. Yes I hope the show runs that long! I also like Amy Morton’s character. Actually… Read more »