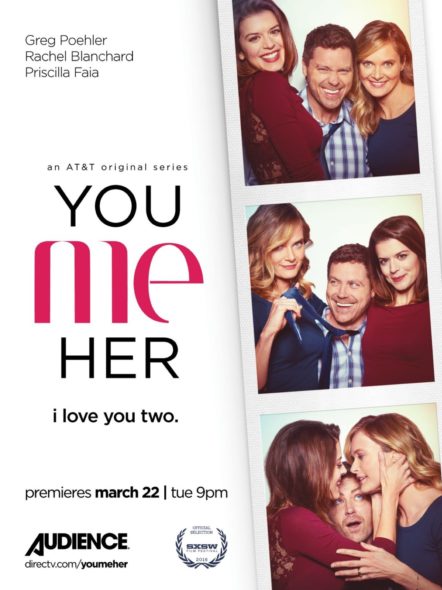 TV show description:
From creator John Scott Shepherd, the You Me Her TV show is a Canadian-American polyamorous comedy-drama series. In the beginning, there was Jack Trakarsky (Poehler) and Emma Trakarsky (Blanchard) and it was good — just not good enough. While trying to conceive, the suburban Portland, Oregon couple realized their sex drive was at an all-time low.

Jack gets it in his head that seeing an escort . could be just the ticket to thawing out his freeze-dried marital life. After making out and opening up to escort Izzy Silva (Faia), a grad student, Jack returns home and confesses his sins to Emma. Jealous and conflicted, she uses a pseudonym to also arrange a date with Izzy, and soon they are all swept up in a three-way affair.

Over the course of just 10 days, Jack, Emma, and Izzy form a more connected relationship and together, they begin to work out the realities and challenges of “throupling.” Will they stay together longterm, or is this just a passing fancy? Stay tuned.

What do you think? Do you like the You Me Her TV series? Should this AT&T Audience Network TV show be ending or been renewed for a sixth season?

I’m really sad to see ‘You, Me, Her’ ending so soon! It’s really funny, it can be touching, has great cast and most of all, it’s relative meaning it’s been nice to have a show that wasn’t a cookie cutter/main-line/heteronormative type show. It’s truly been refreshing and I’ll miss it!

Never could watch that show Direct TV Now has me conditioned to have a Pavlovian reaction after the awful music they play over a still picture as a commercial for the show. The music is so annoying!