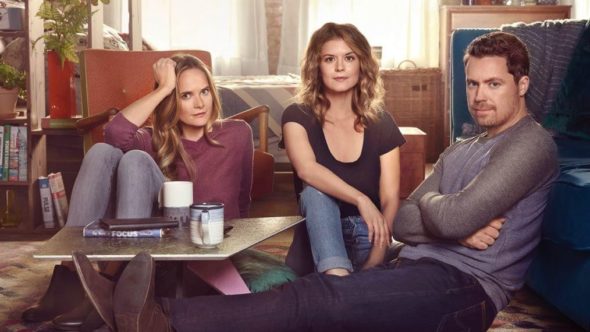 AT&T Audience Network has announced that their romantic comedy series, You Me Her, will be back for both a fourth season and a fifth season. The channel aired the third season of the “throuple” TV show from March until May of this year. It’s unclear how many installments have been ordered for seasons four and five but, there have been 10 episodes in each of the preceding three seasons.

AT&T AUDIENCE Network has also signed on with Entertainment One for a fourth and fifth season of “You Me Her.” The series, created by Executive Producer and Showrunner John Scott Shepherd, stars Greg Poehler, Rachel Blanchard and Priscilla Faia in a romantic comedy with a little something extra: a third person. The show’s executive producers are Alta Loma Entertainment’s Peter Jaysen and Alan Gasmer.

At the end of last season, the “throuple” pulled together their happy ending – a surprise poly commitment ceremony in a pizza joint. Now, they’re settling back into the ‘burbs to live a tweaked version of the conventional “married with children” life. Are “the accidental polyamorists” trying to jam a triangular peg into a round-hole world? Will they break the neighborhood, their peculiar romance, or both?

“We’re excited to bring back some of our most popular original shows as well as introduce a new documentary as we kick off the fall season,” said Daniel York, chief content officer and senior executive vice president for AT&T. “We want to give customers more choices from our popular slate of original programming – whether they enjoy comedy, high-intense drama or captivating docuseries.”

What do you think? Have you seen the You Me Her TV show on AT&T Audience Network? Are you glad that it’s been renewed through a fifth season?

Yay, two more seasons! I can’t wait. As someone who has lived polyamorous relationships, I’m thrilled to finally see one portrayed. Likable, relatable characters with good chemistry and comedic timing, even when their actions are a little far-ferched. It’s a well written and very witty comedy set in an innovative milieu. Wonderfully entertaining!

Have been waiting& watching for its season premier!

I love this show. I have watched it till the end I will continue to watch it. I’m excited to hear that it has been renewed for another 2 seasons. Hurry up bring them back

i love this show – it is funny, charming and while some people won’t be supportive of the poly thread, I find it an interesting dynamic between 3 people that really care for each other – well done!!!

This is a great show. So glad when ATT picked up the show for seasons four and five. Excellent romantic comedy with a fantastic cast that just keeps getting better the longer they are working together. One of the hidden gem comedies on television.

Love the show Clever writing and great acting. I think Priscilla Faia is highly underrated. Can’t believe I have not seen or heard of her before. Miss a few of season 2 players who brought a real comic talent into play. Keep the good work up.

great show love the olot and actors in the series. Please continue it and if possible make the seasons longer more weekly shows.