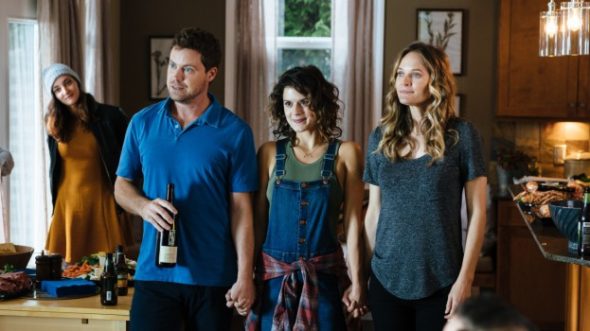 It turns out there won’t be a sixth season for AT&T Audience Network original TV series You Me Her. Production on the fifth season of the show is currently underway in Vancouver and Audience has revealed that year five will be the end.

The fourth season is currently airing on Tuesday nights. The season finale airs on June 11th. Audience hasn’t announced a release date for the fifth season but seasons typically kick off in late winter or early spring.

What do you think? Do you like the You Me Her TV show? Will you be watching the final season of this comedy-drama?

Oh my god no season six, why this is the best show on Netflix. Are they crazy. With all the kids there are so many ideas they could have explored. . Come on guys the fans want season six everyone I no watches this show.

Considering the end of season 5 (and generally this all ******* awesome series), i’am crying so very much about it ending… could have done something out of it with the ebd of S05. Too sad. But you know, all good things end. It’ll stay in my best series ever, like in Top10!

One of our favorite shows!!! We will definitely be watching.

Yes, I will definitely be watching season 5. I have enjoyed the series very much. Thanks