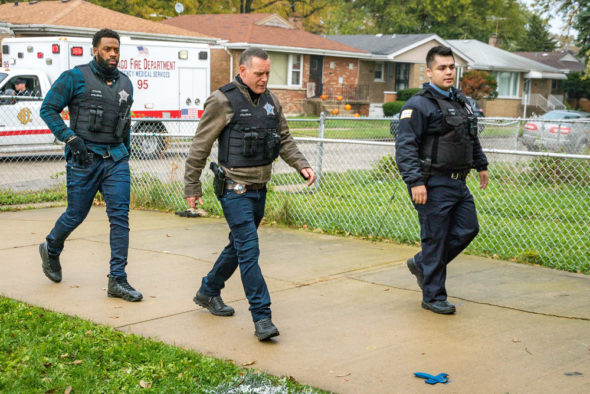 What’s ahead for the 21st District officers in the eighth season of the Chicago PD TV show on NBC? As we all know, the Nielsen ratings typically play a big role in determining whether a TV show like Chicago PD is cancelled or renewed for season nine. Unfortunately, most of us do not live in Nielsen households. Because many viewers feel frustration when their viewing habits and opinions aren’t considered, we invite you to rate all of the eighth season episodes of Chicago PD here.

What do you think? Which season eight episodes of the Chicago PD TV series do you rate as wonderful, terrible, or somewhere between? Are you glad that Chicago PD has been renewed for a ninth season on NBC? Don’t forget to vote, and share your thoughts, below.

LOVE the show! Thank you for RENEWING!

Love the Chicago shows ie Chicago med
Chicago fire
Chicago Pd. There are other shows we like that come on at same time so we DVR them and watch later in night or next morning. The Best show is YELLOWSTONE and my week starts with it and sit on pins and needles till the next episode. However my next day to be happy Wednesday’s when I get to see the Chicago shows. We don’t miss episode always DVR just in case.

Love Chicago PD , how they work as a Team & their different personalities!

Burgess can’t get a break. Like her character, hope she’s OK.
GET THAT GUY!!!!

I love love this show. Do not ever cancel. Bummed with the characters that are gone, but as long as Voight is still there it’s ok for me.

Outstanding show. One of my favorites. Great cast and story line. Please renew the show for many more years.

Love this show. It reminds me of real life, excellent characters, so realistic. Hope it stays on for a long time

What do you say about Hank Vought. He is very tough, generous, sensitive, helpful and of course just plain HOT. Chicago PD, together with the other 2 Chicago’s, should stay on without even a thought of canceling. If it ain’t broke don’t fix it. I don’t know who first said that but it is true. Only wish Antonio and Erin were back. Also want to see Adam and Kim together but I would still watch if they don’t as I am sure many people would.

If you did not know you were watching a television series, one would think it is real life. GREAT show.