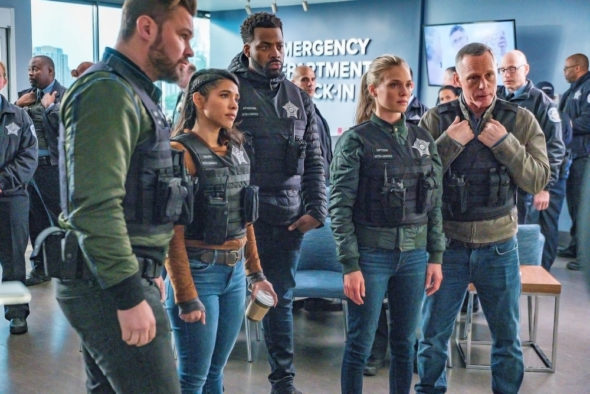 The brave men and women in blue will be protecting their Windy City for at least three more years. NBC has announced the Chicago PD TV show has been renewed for three more seasons — seasons eight, nine, and 10 — which will keep the cop drama on the air through the 2022-23 broadcast network season.

The seventh season of Chicago PD is averaging a 1.07 rating in the 18-49 demographic and 6.87 million viewers. Compared to season six, that’s down by 2% in the demo and down by 3% in viewership.

Today, it was announced that producer Dick Wolf and his Wolf Entertainment company have signed a new five-year deal to remain at Universal Television. The latter is a division of NBCUniversal Content Studios and has been Wolf’s studio home for the past 36 years. As part of the pact, NBC gave three-year renewals to Chicago PD, Chicago Fire (through season 11), Chicago Med (through season eight), and Law & Order: Special Victims Unit (through season 24).

“I’ve thoroughly enjoyed working with Dick over the decades and it goes without saying he remains one of the most influential producers in history,” said Bonnie Hammer, Chairman, NBCUniversal Content Studios. “He is a visionary unlike any other whose impact has changed the entire television landscape. We’re beyond thrilled to have Dick and his team remain in the NBCUniversal family for many years to come.”

What do you think? Are you a fan of the Chicago PD TV series? Do you think that you’ll still be watching in three years?

Chicago PD, Chicago Fire and Chicago Med I really hope Dick Wolf keeps all of them on for a while. There the best.

Yes I have been a big fan since day one.

So happy to see season 8th will start soon. I’m so hooked on this show. My husband and I watch reruns constantly. We kept saying we need new ones and now we are happy to see it starts in Nov.

Yes I love the show, I keep watching it every Thursday and Sunday. I’m a beinge watcher.

I absolutely love this series! It keeps you wanting more and more . I was a late bloomer with the series but have been binge watching ever since to catch up! The writers did a great job creating and casting these characters. I’ll always be a faithful fan !