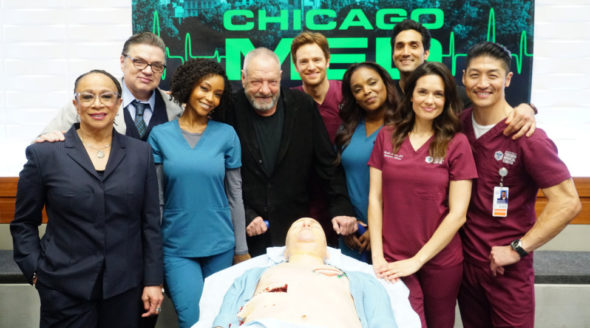 These doctors are “in” — and will stay “in” for at least three more years. NBC has announced the Chicago Med TV show has been renewed for three more seasons — seasons six, seven, and eight — which will keep the medical drama series on the air through the 2022-23 broadcast network season.

The fifth season of Chicago Med is averaging a 1.15 rating in the 18-49 demographic and 8.08 million viewers. Compared to season four, that’s down by 5% and 2%, respectively.

Today, it was announced that producer Dick Wolf and his Wolf Entertainment company have signed a new five-year deal to remain at Universal Television. The latter is a division of NBCUniversal Content Studios and has been Wolf’s studio home for the past 36 years. As part of the pact, NBC gave three-year renewals to Chicago Med, Chicago Fire (through season 11), Chicago PD (through season 10), and Law & Order: Special Victims Unit (through season 24).

“The significance of having Dick Wolf remain at Universal Television can’t be overstated,” said Pearlena Igbokwe, President, Universal Television. “Dick has proven himself masterful at building successful, iconic brands and telling gripping, intelligent and thought-provoking stories. It’s an honor and pleasure to be a part of the Wolf Pack for the next five years. We’re also grateful to NBC for their continued support of the Law & Order and Chicago drama series.”

What do you think? Are you a fan of the Chicago Med TV series? Do you think that you’ll still be watching after three more seasons?

I love watching Chicago Med. I watch all three Chicago programs and love when the episodes crossover. Chicago Med is my favorite one of the three.

Love all 3 Chicago series. I will be watching as long as they are on. Big fan!

I will never stop watching all 3 Chicago Series

I watch all three of Chicago shows.

Yes I wil be watching all three

I love all three shows of Chicago. I hope they stay on.

Love Chicago Med, glad it’s been renewed for the next 3 yrs.

I love Chicago Med. I never miss an episode. Leave it to the genius Dick Wolfe to develop the best on TV.

Glad that I don’t have to worry about the Chicago shows or SVU being renewed for the next three TV seasons.