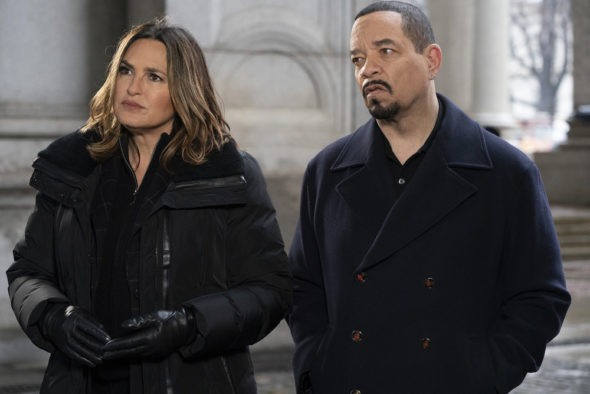 Last fall, with the premiere of the 21st season of Law & Order: Special Victims Unit, the police drama surpassed Gunsmoke as the longest-running live-action series in U.S.  primetime television history. The classic Western aired “just” 20 seasons but did accrue 635 episodes while SVU has aired “only” 474 installments thus far. Now, we know that the series will get to keep chasing that record. NBC has announced that SVU has been renewed for three more seasons — seasons 22, 23, and 24 — which will keep the procedural drama on the air through the 2022-23 broadcast network season.

Today, it was announced that producer Dick Wolf and his Wolf Entertainment company have signed a new five-year deal to remain at Universal Television. The latter is a division of NBCUniversal Content Studios and has been Wolf’s studio home for the past 36 years. As part of the pact, NBC gave three-year renewals to Law & Order: Special Victims Unit, Chicago PD (through season 10), Chicago Fire (through season 11), and Chicago Med (through season eight).

Wolf’s deal comes on the heels of his recent pact with NBCUniversal’s soon-to-be-launched streaming service Peacock, where Wolf’s extensive library – including both the Law & Order and Chicago franchises – will be available for users.

“I’m gratified and excited that Universal will remain our home for five more years,” Wolf said. “This new term deal complements our recently concluded agreement to make Peacock one of the primary destinations for both the L&O and Chicago brands, as well as our extraordinary three-year NBC broadcast pickups on all four current series. We are now supercharged to expand our business on new platforms, both domestically and internationally, while continuing to produce our current and future series for broadcasting and streaming networks.”

Insightful on GBV crimes, VERY informative on so many levels (legal, psychological, societal, criminological, AND as regards the limits to and potential of policing, etc.) consistent and fascinating core characters with new facets to them as time goes on. A SUPER drama. I’m from Kenya.

I have been watching this show for so long I can’t even remember when I started it is wonderfully performed wonderfully written and I am so happy that it’s continued and not canceled.. never missed a show I even watched the reruns