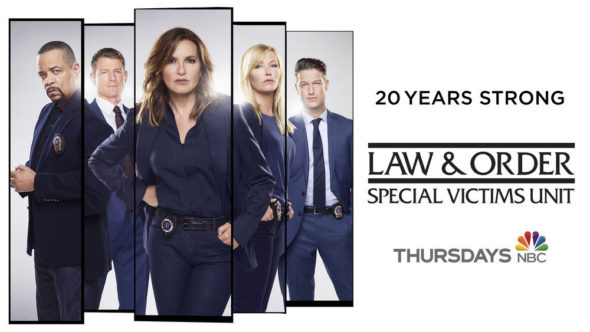 Last year, ratings for the Law & Order: Special Victims Unit TV show on NBC only dropped a little in the demo, and the show actual increased its average total viewership. Thanks to that solid performance, it was a top-five show in both measures and kicks off its 20th season from an enviable position. Now the longest-running primetime drama on television, the series is on its fourth show-runner and seems like it could go on forever. The question at hand may not be: will Law & Order: SVU be cancelled or renewed for season 21, but rather when will they decide to end it? Whenever that is, the ratings will surely be considered in making the decision, so stay tuned. *Status update below.

What do you think? Do you still like the Law & Order: Special Victims Unit TV series? Should it be cancelled or renewed for a 21st season on NBC?

Law & Order hits real life at the core. This kinda stuff does really happen. It also makes people more aware of problems facing people of all backgrounds, and status. That’s what keeps it going. So yes to season 22

Please, please, never take it off. It saved my sanity and gave me hope after my close encounter with sexual violence. And I’m pretty sure I’m not alone. Thank you, SVU

Need to end. stories tiresome. Better shows being cancelled while suv keeps being renewed. Chris Meloni was smart to leave show while it was still good. Mariska Hargitay aging, needs to consider letting go of her Benson persona and move on to other acting roles

Strong? The LOWEST LIVE RATINGS EVER! Not worth watching when the new episode premieres? ADVERTISERS PLEASE TAKE NOTE. Stop wasting big money advertising on this show. Time for this show to open up the purse strings and get some more people. Time to stop making it the Mariska and everyone else show. Moving to Thursdays at 10 pm est did hurt. How low will it go next season if nothing changes?

Law and Order SVU should definitely be renewed for Season 21

how is it 2019 and we still use outdated ratings as an indicator, even live + same day are irrelevant.

I still watch regularly, but I might wait till the weekend, or wait and watch a couple episodes at once. people are still watching, just not as it airs

We use that outdated system because the most important thing NOW is to find out how many people are watching it LIVE. If you watch it after that, you are probably deleting the commercials, and why should these companies help pay to keep this show on the air if you aren’t watching the commercials? If Netflix or someone like that is helping to pay the cost of the show, then the total people watching comes into play. Advertisers had to wake up sometime.

I still love it and miss the original one. Only show, other than news, I still watch and love. Please don’t cancel it!

SVU has been running strong for 20 years my question is Why Stop Now? Marishka Hargitay already said that is the creator wants to keep making episodes the she’ll keep being
Lt. Olivia Benson. This show is real things/cases that are happening in our country so why would we not want to keep getting educated about victims of rape/abuse and the facts of untested rape kits. With that said I vote keeping SVU on for season 21!

You mean they should keep it going despite this show having the worst ratings ever in all its years, or because NBC has absolutely nothing that they can replace it with that will have ratings at least as awful as these? The show will be back. Let’s see the live ratings average get over a 1.0, and then it will have earned the renewal.

The ratings are atrocious, even with the Thursday 10 pm spot. Maybe they should put an end to the Alt Left garbage and go back to being a real show. I’m not watching it live anymore(I’m actually not watching at all) and I can see I’m not the only one.

There’s no alt left garbage as you state. You need to stop drinking the Faux News known as Fox, and quit letting the Trumpkins think for you.

Will the ratings go back up once Football season is over? Four Weeks with ratings under a 1.0? Wow!

For once in a life time ,keep the good shows going …SVU IS THE BEST …i love this show will never stop watching it

The show has been on for 2 weeks. I thought it just started. The show went too far to the left last season. I don’t know if I care to watch anymore.

Yes, because we all know sexual assault, rape, murder, etc. are left vs. right issues. Get real! Apparently you haven’t been watching the show for 20 years.

I have been watching for 19 years this 20 season is so far left, I can’t watch it and they do make it left and right. Just listen to the way they talk. One episode they arrested a man and said he kidnapped a child even though they knew they were lying. When you put your political believes over the law I stop watching. I will continue to watch repeats of old episodes. But no new ones for me.

I totally agree, this show explains to people the ignorance the U.S is drowning in when it comes to rape and abuse.

Not to be rude or anything because this is just a show but, how can a woman’s
( a Lieutenant at that) son being abducted be going to far left? Just asking