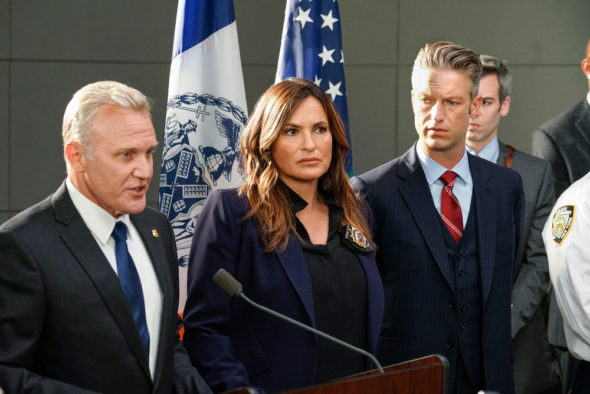 What’s ahead for the team in the 23rd season of the Law & Order: Special Victims Unit TV show on NBC? As we all know, the Nielsen ratings typically play a big role in determining whether a TV show like SVU is cancelled or renewed for season 24. Unfortunately, most of us do not live in Nielsen households. Because many viewers feel frustrated when their viewing habits and opinions aren’t considered, we invite you to rate all of the 23rd season episodes of Law & Order: Special Victims Unit here.

What do you think? Which season 23 episodes of the Law & Order: Special Victims Unit TV series do you rate as wonderful, terrible, or somewhere between? Are you glad that SVU has been renewed for a 24th season on NBC? Don’t forget to vote, and share your thoughts, below.

Please, please give advise what I must I do to also view SVU and every thing running along.You cannot remove this as this my special treat to watch.I never ever missed an episode so please advise what I must do to get access to watcj these, PLEASE???

I thank you in advance!!!

I really really enjoy this series please don’t canceled it

SVU is a classic show with classic characters that is timeless. I still watch all seasons on Hulu. I can’t perceive tv watching without it. Superb in everyway. ***Mariska, darling..please go back to the short cut hair..we all look much better in short hair as time passes…it shows off our beautiful faces and eyes. Also, may I suggest some highlights? You’ll thank me..
#usedtodohair

This one is still great, and hopefully won’t be brought down due to Organized Crime!

This is one of my favorite shows

Lost its zip. Not interesting anymore. Chemistry between actors does not exist like it once was.

The newest season is the greatest, stories keep you on the edge of your seat

This is one of the best shows on TV. Please continue with it.

The best for ever

No wonder this show is still so well received- it continues to deliver excellence in stories, and top performances by cast! Very sorry it looks like 2 main characters are leaving.
Hopefully they’re replaced by other great actors! This series is always flawless.

Love this show. I wish Mariska would fix her hair once in a while though. It always looks like she just rolled out of bed and she is so pretty but her hair drags her down. I still love her though.

Funny, because I’ve been saying that as we go up in age, we look refreshed and sassy with a cute short hairstyle, with highlights to show off face and eyes much better. She’s so beautiful but that draggy hair just takes away from her beauty. Ps I used to be a hairstylist…