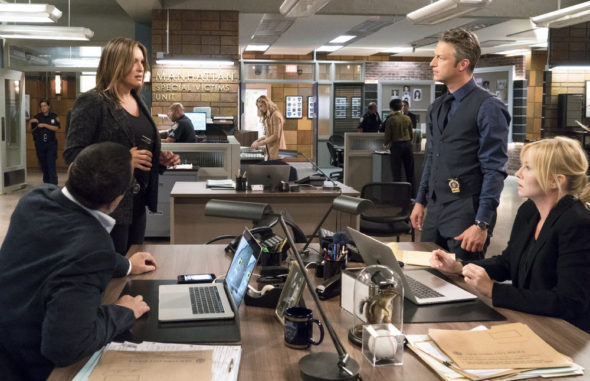 Are Olivia Benson and the Special Victims Unit still at the top of their game during the 20th season of the Law & Order: Special Victims Unit TV show on NBC? As we all know, the Nielsen ratings typically play a big role in determining whether a TV show like Law & Order: SVU is cancelled or renewed for season 21. Unfortunately, most of us do not live in Nielsen households. Because many viewers feel frustrated that their viewing habits and opinions aren’t considered, we’d like to offer you the chance to rate all the season 20 episodes of Law & Order: SVU here. *Status update below.

What do you think? Which season 20 episodes of the Law & Order: SVU TV series do you rate as wonderful, terrible, or somewhere between? Should NBC cancel or renew Law & Order: SVU  for a 21st season? Don’t forget to vote, and share your thoughts, below.

I have grown up with this show. I love the show. It is a part of my family. Please keep it going!!

Law and Order-SVU should be renewed for at least Season 21…I’d say they should consider ending it after Season 25 or more! Mariska Hargitay is amazing as Olivia Benson! Long live SVU!!!

Only show I can rewatch over and over and still love it like the first time I watched it. Been watching it since the first episode aired! I just got done re watching from season 1 and think I might start again because I cannot find anything worth watching anymore. I am very picky and cannot wait to watch season 21.

Law & order svu is absolutely the best show on TV. Past presant and future hands down the beat show ever …I dont care what rating the show has good bad fantastic whatever to me n million others we love the show n want it to stay going …SO IF THERE IS ANYONE WHO DOES NOT WANT THE SHOW BACK PLEASE KEEP COMMENTS TO YOUR SELF …THANK YOU …

I love S.V.U i have seen all season’s. Olivia Benson is an unbeleivable actress. I was sad when Stabler left. I just hope they don’t cancell the show. It has changed alot peoples life’s. I don’t think there has been a show that has.

Good to see this show is around.

Still great after all these years.

Longer the shows out the better it gets , I never get tired of SVU ,its everyday life ,crime doesnt stop out side so we no it wont stop in the show it self …keep bringing us SVU THE BEST SHOW IN THE WORLD

I was watching “Murder, She Wrote” every weekday morning. On WGN it was replaced this week with “Bill Cunningham” (?) talk show. “In The Heat of the Night” is still running through for the 3rd time; at least. I didn’t get to see the entire series of “M,SW” or it start over, as in “ITHof the N”. I certainly didn’t expect to see a “Jerry Springer”-type show on WGN. Please don’t ignore my one person request note. I was watching WGN for old series’ & don’t want to watch a “screaming/arguing-type” show for 3 hours. I would like for WGN… Read more »

What does this have to do with SVU?

SVU is such an amazing and unique show that inspires, teaches, and gives hope, and provides awareness to so many people. We need this show! I’ve been watching since the begining and will never stop. Please continue to renew, as this show is a part of so many of our lives!