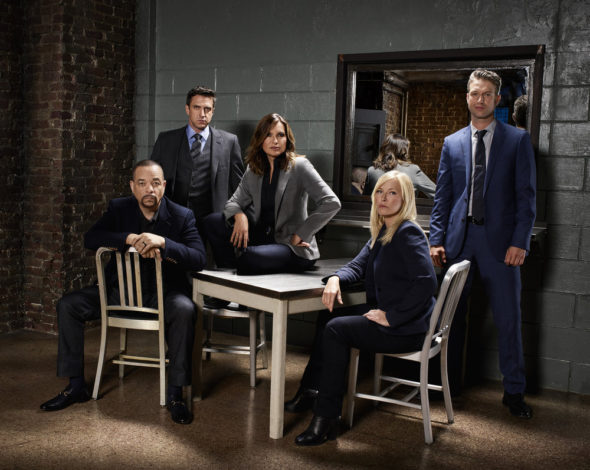 Is there an end in sight for this Dick Wolf police procedural? Will the Law & Order: Special Victims Unit TV show be cancelled or renewed for a 20th season on NBC? The television vulture is watching all the latest cancellation and renewal news, so this page is the place to track the status of Law & Order: SVU, season 20. Bookmark it, or subscribe for the latest updates. Remember, the television vulture is watching your shows. Are you?

The 19th season of Law & Order: SVU averaged a 1.25 rating in the 18-49 demographic and 5.95 million viewers. Compared to season 18, that’s down by 6% in the demo and up by 2% in viewership. Find out how Law & Order: Special Victims Unit stacks up against the other NBC TV shows we are tracking.

Despite declining ratings, Law & Order: SVU remains one of NBC’s top-rated TV series. Will NBC cancel or renew it for a 20th season? The show is still performing well so I’m sure it will be renewed. Additionally, when shows are approaching a season which ends in a zero (or a five), there’s a certain cachet to picking up that season. I predict this show will easily snag a 20th season. Meanwhile, I’ll keep an eye on the ratings and will update this page with breaking developments. Subscribe for free updates on any Law & Order: SVU cancellation or renewal news.


What do you think? Are you glad that the Law & Order: Special Victims Unit TV show has been renewed for a 20th season? How would you feel if NBC had cancelled this TV show, instead?

This season(20) has so far been much better then 19. Watching the latest episode and I’m on the edge of my seat . Before every episode was about some female being raped . There was only so many ways someone could be raped. This season there is variety and good old suspense . I can easily see season 21 if this format keeps up . Good job Olivia !

Love ice t and mariska in this show. Please keep this show going

I do hope in season 20 (since it was said in an interview with Mariska that the actor would probably return) that Barba can come back into the scene as either the ADA (again) or as a recurring character the SVU squad could chill with. That would awesome. I liked Stabler+Olivia, but now I’m full Barson. (Barba+Benson)

I love this program. We don’t have much choice.
even cable sucks. Please, please bring on season 20.