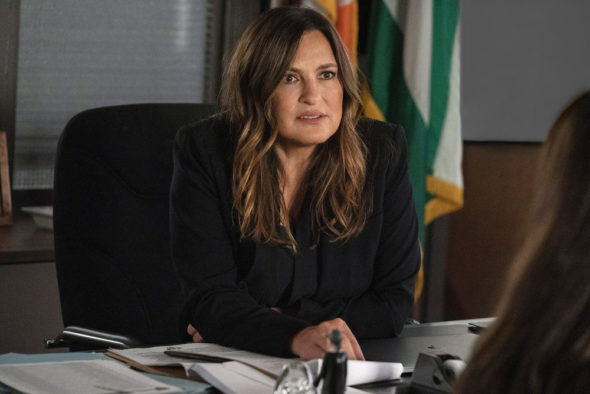 How long will Benson and her team stay on the beat? Has the Law & Order: Special Victims Unit TV show been cancelled or renewed for a 24th season on NBC? The television vulture is watching all the latest cancellation and renewal news, so this page is the place to track the status of SVU, season 24. Bookmark it, or subscribe for the latest updates. Remember, the television vulture is watching your shows. Are you?

The 23rd season of Law & Order: Special Victims Unit averaged a 0.65 rating in the 18-49 demographic and 4.48 million viewers. Compared to season 22, that’s down by 15% in the demo and up by 4% in viewership in the live+same day ratings (including DVR playback through 3:00 AM). While these numbers don’t include further delayed or streaming viewing, they are a very good indicator of how a show is performing, especially when compared to others on the same channel. There can be other economic factors involved in a show’s fate, but typically the higher-rated series are renewed and the lower-rated ones are cancelled. Find out how SVU stacks up against other NBC TV shows.

We don’t have to wonder if NBC will cancel SVU right now since it’s already been renewed for season 24.  The show still does very well for the network but, all shows end sometime. Could this series survive Hargitay’s eventual departure? I’m betting Wolf and company would give it a try but we’ll have to wait and see. I’ll update this page with breaking developments. Subscribe for free alerts on Law & Order: Special Victims Unit cancellation or renewal news.

What do you think? Are you glad that the Law & Order: Special Victims Unit TV show has been renewed for a 24th season? How would you feel if NBC had cancelled this TV series, instead? How much longer should it run?

I’ve been in love with this show since it came out and i was literally like 11 I’m 22 almost 23 now . Some of these episodes i can repeat word for word I’m gonna be so hurt when they cancel it . I feel like it’s coming with how dramatic and hectic everyone’s lives have been the past season

I love SVU!
This show might had ups and downs, but still had had so many seasons that kept us waiting for the next week new episodes, or even for the reruns. Law and Order SVU has good and great episodes through many seasons and many years! So, NBC should keep this show. Cancelling a new season will be a really bad decision. Fans, like me, will probably change the channel looking for good shows that will not be as great as Olivia Benson and her crew.