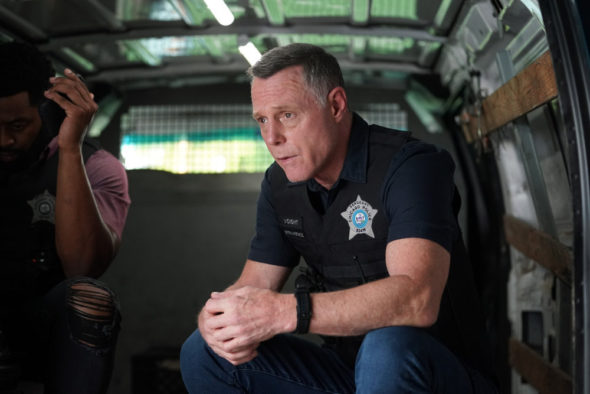 Is there a long future for Voight and his team? Has the Chicago PD TV show been cancelled or renewed for a 10th season on NBC? The television vulture is watching all the latest cancellation and renewal news, so this page is the place to track the status of Chicago PD, season 10. Bookmark it, or subscribe for the latest updates. Remember, the television vulture is watching your shows. Are you?

Airing on the NBC television network, Chicago PD stars Jason Beghe, Jesse Lee Soffer, Patrick John Flueger, Marina Squerciati, LaRoyce Hawkins, Tracy Spiridakos, and Amy Morton. This TV show follows the personal and professional lives of the men and women of the Chicago Police Department’s elite Intelligence Unit. They combat the city’s most heinous offenses including organized crime, drug trafficking, and high-profile murders. Detective Sgt. Hank Voight (Beghe) is at the center of the department’s war on crime and he’ll do anything to bring criminals to justice. The series also features crossovers with Chicago Med and Chicago Fire.

The ninth season of Chicago PD averaged a 0.72 rating in the 18-49 demographic and 5.84 million viewers. Compared to season eight, that’s down by 16% in the demo and down by 4% in viewership in the live+same day ratings (including DVR playback through 3:00 AM). While these numbers don’t include further delayed or streaming viewing, they are a very good indicator of how a show is performing, especially when compared to others on the same channel. There can be other economic factors involved in a show’s fate, but typically the higher-rated series are renewed and the lower-rated ones are cancelled. Find out how Chicago PD stacks up against other NBC TV shows.

We don’t have to wonder if NBC will cancel Chicago PD right now. The police drama has already been renewed through season 10. But, could year 10 be the end? Subscribe for free alerts on Chicago PD cancellation or renewal news.

What do you think? Are you glad that the Chicago PD TV show has been renewed for a 10th season? How would you feel if NBC cancelled this TV series, instead?

It was a great show until new season started using God’s name in vain. The GD word. Ruined it for me. Disappointed in the show and local channel NBC. NOT WATCHING A SHOW SAYING GD. Have some morals

I enjoy all the Chicago series I think along with creativeness that is brought it does show alit of reality in a calmer was it’s interesting and seems planned well on what’s actually out in the world. It’s odd that good shows like this even though there is violence. Get retired for shows that show same partners or shows with sex . Or shows with no plots no thought etc I’m a adult female that very much enjoy these shows like many I need to stream them

Canceling Chicago Pd serious on NBC would be the biggest mistake for them! There is so many fans out there that even record the shows so they can watch it later! Hank Voight is the one that makes the show! Without him there would be no show! Hank and his team are the best for the crime that Chicago Pd has! I wish there was more of there shows that goes all year long instead of a few months a year!

Glad its going for a 10th season and many more. Great show great actors to even think of cancellation.

I just love all the Chicago shows they are the best. But I don’t get it with this shooting that Voight is trying to cover up, it was a good shot, after all the guy reached for voights gun so the guy got shot. Why cover it up the writers were stupied on that scenario.