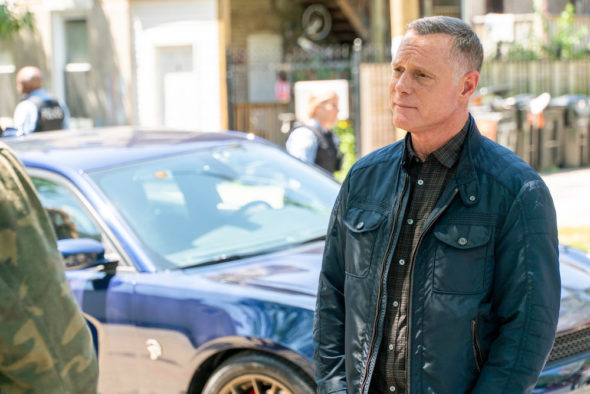 How long can Voight stay in control? Has the Chicago PD TV show been cancelled or renewed for an eighth season on NBC? The television vulture is watching all the latest cancellation and renewal news, so this page is the place to track the status of Chicago PD, season eight. Bookmark it, or subscribe for the latest updates. Remember, the television vulture is watching your shows. Are you?

Airing on the NBC television network, Chicago PD stars Jason Beghe, Jesse Lee Soffer, Patrick John Flueger, Marina Squerciati, LaRoyce Hawkins, Amy Morton, and Tracy Spiridakos. This TV show follows the personal and professional lives of the men and women of the Chicago Police Department’s elite Intelligence Unit. They combat the city’s most heinous offenses including organized crime, drug trafficking, and high-profile murders. Detective Sgt. Hank Voight (Jason Beghe) is at the center of the department’s war on crime and he’ll do anything to bring criminals to justice. The series also features crossovers with Chicago Med and Chicago Fire.

The seventh season of Chicago PD is averaging a 1.09 rating in the 18-49 demographic and 7.04 million viewers. Compared to season six, that’s down by 1% in the demo and down by 1% in viewership. Find out how Chicago PD stacks up against other NBC TV shows.

Will NBC cancel or renew Chicago PD for season eight? Unless something unforeseen happens, I’m sure it will be renewed. I’ll keep an eye on the ratings and update this page with breaking developments. Subscribe for free alerts on Chicago PD cancellation or renewal news.

What do you think? Are you glad that the Chicago PD TV show has been renewed for an eighth season? How would you feel if NBC had cancelled this TV series, instead?

Chicago PD is the best show on TV. It is the most realistic show I’ve seen as Cop shows go. I hope this show is on TV for its loyal watchers for years to come! I wouldn’t mind seeing a few characters return to the show as they were great!

I got a late start on getting hooked onto it because of my job. had to be to work the next am at 4 am

I LOVE Chicago PD!
My husband & I even went to Chicago for our anniversary last year because of the love of Chicago PD. We took pictures a front of the Precinct. We would be so hurt & disappointed if it is canceled because of the covid-19 pandemic. Please keep Hank & bring Haley back from FBI. She’s great!
From Dallas Tx

I love hank glad to have the 8 season returning.

I am so excited for Chicago PD to start its newest aeason.What will happen with Kevin ?
Hell we all know Voight has got this…
Cant wait

Please renew, I love this serie, from Puerto Rico

I would be highly disappointed if Chicago PD gets cancelled.. It is a great show. All you see mostly is reality TV, which isnt reality at all. Its all fake and phony. I truly enjoy this show. Please keep it on, and dont follow all the other channels cancelling coo shows. Be the one to stand for something, dont be afraid to stand alone and different from the rest, if necessary. Thank you so much.

My husband and I love Chicago P D.
It’s one of the few shows we look forward
To.