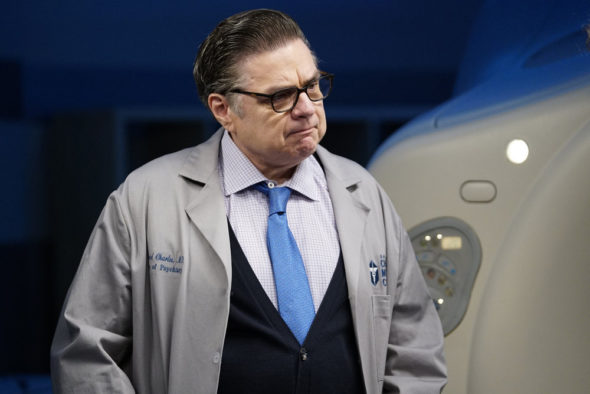 How healthy is this medical drama? Has the Chicago Med TV show been cancelled or renewed for a sixth season on NBC? The television vulture is watching all the latest cancellation and renewal news, so this page is the place to track the status of Chicago Med, season six. Bookmark it, or subscribe for the latest updates. Remember, the television vulture is watching your shows. Are you?

The fifth season of Chicago Med is averaging a 1.16 rating in the 18-49 demographic and 8.33 million viewers. Compared to season four, that’s down by 4% and up by 1.15%, respectively. Find out how Chicago Med stacks up against other NBC TV shows.

Will NBC cancel or renew Chicago Med for season six? The ratings are good and this series is part of NBC’s successful Chicago line-up. I’m sure it will be renewed. I’ll still keep an eye on the ratings and update this page with breaking developments. Subscribe for free alerts on Chicago Med cancellation or renewal news.

What do you think? Are you glad that the Chicago Med TV show has been renewed for a sixth season? How would you feel if NBC had cancelled this TV series, instead?

Noooooo, don’t cancel any of the Chicago series!

I’m so happy to hear that Chicago Med has been renewed for the next three seasons. Love all three Chicago storylines.

we sure hope the chicago dramas continue on nbc on weds. nites

we loved the weds. nite chicago dramas . we sure hope to see these fabulous programs continue

I love all the characters on Chicago PD, I wish that Lindsey, al & Antonio were still part of the team, but I still love the show and look forward to when the new episodes start, when will that be?

I love, the intense, the intrigue that season left me with, would love to see what season 6 have instore, the drama romance and all☺

Great show. Love all the actors in these shows. Totally agree with the romance and drama. Let keep these episodes going,

Love all the Chicago Series, Fire, Pd and Med. Very happy to see them all renewed. Keep them going!

I think that this show should be on at 1:00 with the rest of the soap operas. After all the time we have invested, it sucks now. A bunch of Drama Mamas.

I enjoy all three Chicago shows I hope they continue. Any idea what happens when the shows are pre empted? I’ve looked ahead and it looks like the episodes just skip on. Like next week old Chicago Med on but the next week I see Chicago fire skips an episode

Yes I hope that chicago med will be renewed