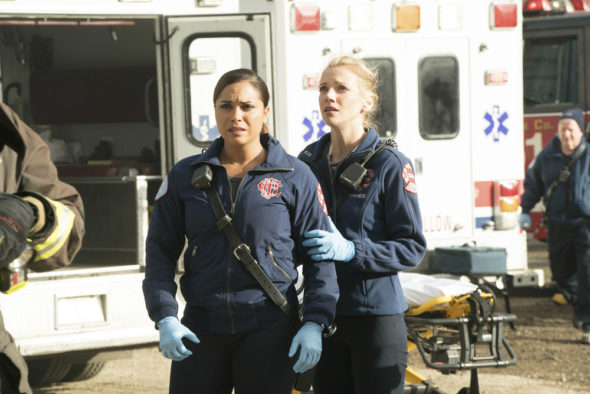 Will the brave men and women of Chicago’s Firehouse 51 survive to see another season? Will viewers continue to watch? Has the Chicago Fire TV show been cancelled or renewed for a seventh season on NBC? The television vulture is watching for the latest cancellation and renewal news, so this page is the place to track the status of Chicago Fire, season seven. You can bookmark this page or subscribe for the latest updates. Remember, the television vulture is watching your shows. Are you?

The sixth season of Chicago Fire on NBC averaged a 1.08 rating in the 18-49 demographic with 5.98 million viewers. Compared to season five, that’s down by 29% in the demo and down by 15% in total viewers. Compare its standing against the other NBC TV shows we are tracking.

After several years on Tuesday nights (an evening when NBC attracts a large audience for The Voice), the peacock network has moved Chicago Fire to a highly competitive Thursday evening schedule. It’s expected that the ratings will take a hit. With that in mind, the numbers look pretty good so I’m certain the series will land a seventh season renewal. I’ll watch the ratings and will update this page as needed. Subscribe for free updates on any cancellation or renewal news regarding Chicago Fire.


What do you think? Are you glad that the Chicago Fire TV show has been renewed for a seventh season? How would you feel if NBC had cancelled this TV show, instead?

Great news, exactly what I wanted to hear as is best show on television by far and cant wait even though still to see series 6!! thanks, keep series coming!

Yes please bring this back for a 7th season! Great show!!!!

Absolutely have to have a 7th season! Love this show