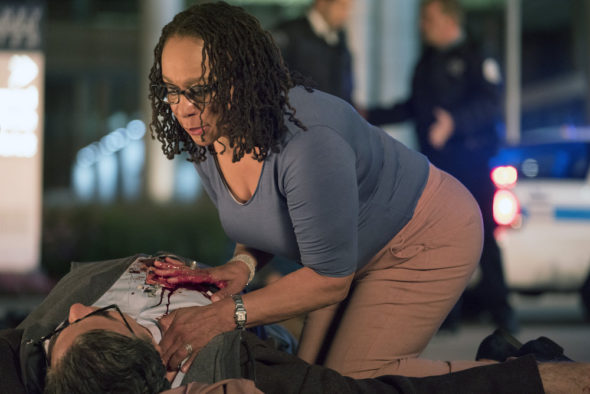 What is the prognosis? Has the Chicago Med TV show been cancelled or renewed for a fourth season on NBC? The television vulture is watching for the latest cancellation and renewal news, so this page is the place to track the status of Chicago Med, season four. Bookmark it, or subscribe for the latest updates. Remember, the television vulture is watching your shows. Are you?

The third season of Chicago Med on NBC is averaging a 1.22 rating in the 18-49 demographic and 6.62 million total viewers. Compared to season two, that’s down by 1% in the demo and down by 1% in viewership. Find out how Chicago Med stacks up against the other NBC TV series.

While the ratings dropped last year, this medical drama was still a top performer for NBC during the 2016-17 television season, so it is no surprise it is back for another installment.  I don’t expect a cancellation this time around, unless something terrible comes out of the blue. Because it is now in its third season, Chicago Med finds itself at that time in a show’s life when the executives’ minds turn to the prospect of a profitable syndication package, and a higher episode count will help its resale value. I’ll update this page with breaking developments. Subscribe for free alerts on any Chicago Med cancellation or renewal news.

What do you think? Are you glad that NBC renewed its Chicago Med TV show for season four? How would you feel if they had cancelled this TV series, instead?

Love this show. watch it every week. Can’t wait to watch season 4 and see what is going to happen . Great cliff hanger

This is a great show and I am so glad its renewed – love the cast!!

Really wish the writers would do a better job with the female characters, not to name names, Natalie, as I’m sure your a better actress than the part written for you. It feels like the writers intend you to come across as strong and compassionate, instead you are whiny, unprofessional and, well, crazy, and not in a fun way. Not to mention you are a terrible mother, your kid is a brat, do something now before it gets out worse, or is that a future story-line? I don’t even know where to start with Sara’s character….wow, just wow.

I so enjoy Chicago Med. the show is always new and has great drama. Please renew it for another season. It is so worth the watch

Like the show, but would be nice if someone on there would have a relationship WITHOUT all the drama–it happens. Also, if you’re going to mention a disease like Sarcoidosis, get your information correct–not everyone is able to ‘see a doctor and forget about it’–it’s not the flu, it’s an Autoimmune disease that thousands of people have died from. Please, get the information right or don’t bring it up. Thanks from someone who’s been fighting this disease for 27 years.

LOVE this show!!!! Please Don’t cancel. Best of all the Chicago shows

This season has been awful. I’m considering quitting this show. I would not care one bit if they cancelled it at this point.