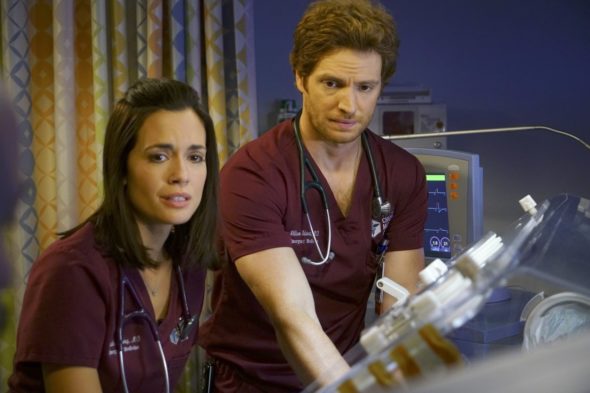 NBC is sticking with Chicago Med. Today, the network announced they’ve renewed the TV show for a fourth season.

Instead of issuing a press release, NBC announced the Chicago Med season seven renewal in the following tweet.


The ED isn't closing its doors yet! #ChicagoMed will be back for Season 4! pic.twitter.com/EK0clFcE6x

Not only is Chicago Med one of NBC‘s highest-rated TV shows, but ratings have actually increased this season. Currently, season three is averaging a 1.23 rating in the 18-49 demo and 6.67 million viewers.

What do you think? Do you watch the Chicago Med TV series? Are you happy it’s been renewed?

Love Chicago Med; medical education is cutting edge but not over the top. Love the characters. Pls keep this tv series for a long time.

Chicago Med is my favorite drama show on television. The acting, writing and atmospheric sets are first rate. I’m shocked it’s never been nominated for an Emmy. Thanks for renewing this first rate quality show.

I am thrilled they are bringing Chicago Med back!!! I really enjoyed every episode and was pretty upset when I heard I was being cancelled. I got online and like a lot of other people voiced my displease and asked that they change their minds and keep it on. I watch all 3 Chicago shows and think they are all very well written and all the actors are great. I especially like the interaction of the 3 shows. I am so glad!!! THANK YOU!!!

Love the show, its really good and they have new people all the time which is awesome dosent look like the same folks always in the scene ..I know its more people in a er..lol but great show good suspense..good looking people hope it keeps up everything

Yeah! Compelling story lines and remarkably talented actors…what more can you ask for! Congratulations to the cast and crew! Lucky us…the viewers!

I MEANT NOT TO BE OVER CONFIDENT [PREVIOUS COMMENT]

VERY GOOD, I AM SO HOOKED WATCHING IT, I ENJOY WATCHING HOW MENTAL HEALTH AND PHYSICAL HEALTH COMBINE, HOW YOU MAY THINK ONE THING BUT IT IS A WHOLE DIFFERENT THING. AND VERY IMPORTANT TO BE OVER CONFIDENT. AND ALSO ONE THING THIS SHOW AND CHICAGO FRANCHISE HAS THAT I HAVEN’T REALLY SEEN EXCEPT IN CARTOONS ARE THE CROSSOVER EPISODE AND CHARACTERS. I HOPE IT HAS THE SAME SUCCESS OR MORE OF CHICAGO FIRE.

Loved Chicago Med–the stories and characters. In fact I enjoy all three of the Chicago series. Watch them all. Glad they’re coming back!

One of the most awesome programs ever. Love it and look forward to season 4!

Thid is a very good show

Good. This is one of those shows that you really look forward to.

I am thrilled, both because I watch Chicago Med, Chicago Fire, and Chicago PD and because I am a background actor on all three shows!

I am thrilled, both becauseI watch Chicago Med, Chicago Fire, and Chicago PD, but also because I am a background player on all three shows!

This is fabulous news Chicago MED ( FIRE & PD ) are the only reason I turn on my TV .

Love both Med and Fire….