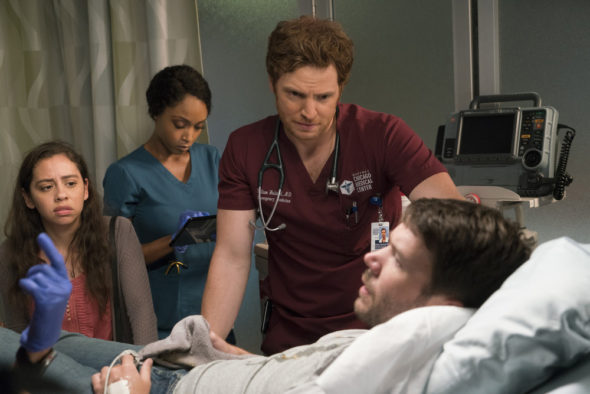 Is this show still in good health? Has the Chicago Med TV show been cancelled or renewed for a fifth season on NBC? The television vulture is watching all the latest cancellation and renewal news, so this page is the place to track the status of Chicago Med season five. Bookmark it, or subscribe for the latest updates. Remember, the television vulture is watching your shows. Are you?

The fourth season of Chicago Med averaged a 1.20 rating in the 18-49 demographic and 8.24 million viewers. Compared to season three, that’s down by 1% in the demo and up by 25% in viewers. Find out how Chicago Med stacks up against other NBC TV shows.

Will NBC cancel or renew Chicago Med for season five? I can’t see this series being cancelled unless the ratings completely collapse. For now, I’ll keep a hungry on the ratings and update this page with breaking developments. Subscribe for Chicago Med cancellation or renewal alerts.

What do you think? Are you happy Chicago Med was renewed for a fifth season? How would you feel if NBC had cancelled this TV show, instead?

It’s an Awesome show I look forward to it Every Week! NO Cancelling :))

Why cancelled so so it’s good

Love this show plus Chicago Fire please keep these on air!!