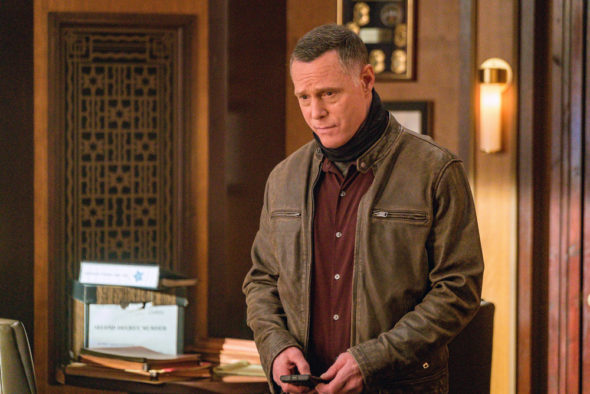 What won’t Voight do to see justice served? Has the Chicago PD TV show been cancelled or renewed for a ninth season on NBC? The television vulture is watching all the latest cancellation and renewal news, so this page is the place to track the status of Chicago PD, season nine. Bookmark it, or subscribe for the latest updates. Remember, the television vulture is watching your shows. Are you?

Airing on the NBC television network, Chicago PD stars Jason Beghe, Jesse Lee Soffer, Patrick John Flueger, Marina Squerciati, LaRoyce Hawkins, Amy Morton, Tracy Spiridakos, and Cleveland Berto. This TV show follows the personal and professional lives of the men and women of the Chicago Police Department’s elite Intelligence Unit. They combat the city’s most heinous offenses including organized crime, drug trafficking, and high-profile murders. Detective Sgt. Hank Voight (Beghe) is at the center of the department’s war on crime and he’ll do anything to bring criminals to justice. The series also features crossovers with Chicago Med and Chicago Fire.

The eighth season of Chicago PD averaged a 0.86 rating in the 18-49 demographic and 6.09 million viewers. Compared to season seven, that’s down by 21% in the demo and down by 14% in viewership. Find out how Chicago PD stacks up against other NBC TV shows.

There’s no need to worry about Chicago PD being cancelled for a while. The Wednesday night police series has already been renewed for seasons nine and 10. I’ll update this page with breaking developments. Subscribe for free alerts on Chicago PD cancellation or renewal news.

What do you think? Are you glad that the Chicago PD TV show has been renewed for a ninth season? How would you feel if NBC had cancelled this TV series, instead?

Bought, voight voight, it was a confusing and sometimes lackluster season it stayed with a bang with Kevin an it was great then it eased off and barely saw voight in episodes jay and his love interest are not the hot couple we’d wish they could be but jay needs more than a pretty partner in his life again, each girl in his arms does not deserve him plus there all just the female version of voight, love the show get it together behind the scenes, heal the bad blood with production and the talent and make it the Amazing… Read more »

Yessssss Chicago PD is then best show ever

I am so happy that are renewing Chicago P.D until Season 10! If they ever think of cancelling it before then I wont be happy. I look forward to Wednesday night’s.