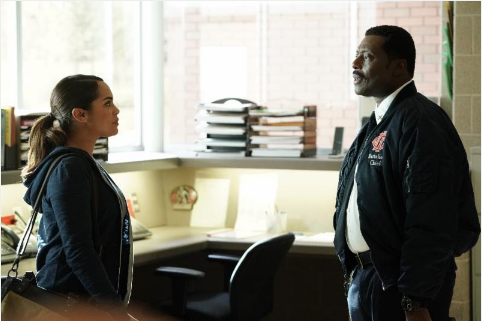 “This is just the beginning.” NBC has just released a new preview for the season six return of Chicago Fire.

Read more info and watch a preview below:

A Man’s Legacy”
MOLLY’S NORTH GETS READY TO OPEN ITS DOORS — Brett (Kara Killmer) attempts to make a lifesaving decision in the field to someone near and dear to the firehouse family. In an effort to impress Lily (guest star Ariane Rinehart), Otis (Yuri Sardarov) scrambles to get everything together for the grand opening of Molly’s North. Meanwhile, Boden (Eamonn Walker) becomes emotional following the rescue of a famous blues player from a burning apartment building and Dawson (Monica Raymund) struggles to come to terms with how she has been dealing with her father. Jesse Spencer, Taylor Kinney, David Eigenberg, Miranda Rae Mayo, Joe Minoso and Christian Stolte also star. Randy Flagler, Anthony Ferraris, Jon Seda, Colin Donnell and Marlyne Barrett guest star.

https://www.youtube.com/watch?v=Fy26mGVSijw
What do you think? Do you watch Chicago Fire? Are you enjoying season six so far?

Yes I love this show and all the Chicago shows.

I absolutely adore the show it’s one of the best television shows on CBS. I find the acting to be superior to most dramas on TV. I am so happy that you decided to give us another season. Awesome awesome job congratulations

My TIVO is primed and so am I for the return of Season Six.