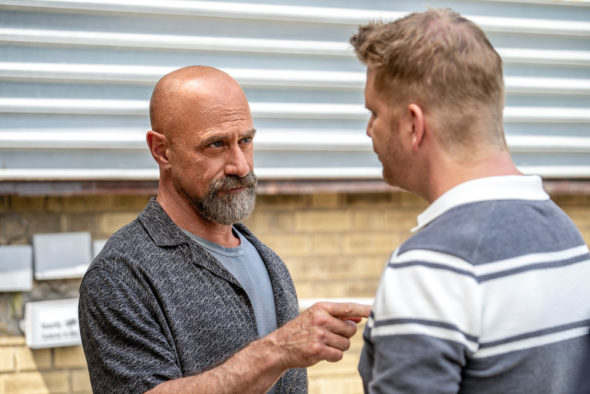 Is this spin-off the hit that NBC was hoping for? Has the Law & Order: Organized Crime TV show been cancelled or renewed for a third season? The television vulture is watching all the latest cancellation and renewal news, so this page is the place to track the status of Organized Crime, season three. Bookmark it, or subscribe for the latest updates. Remember, the television vulture is watching your shows. Are you?

Airing on the NBC television network, Law & Order: Organized Crime is a spin-off of the long-running Law & Order: SVU TV show and stars Christopher Meloni, Danielle Moné Truitt, and Ainsley Seiger. Recurring actors include Dylan McDermott, Tamara Taylor, Mariska Hargitay, Ellen Burstyn, Ron Cephas Jones, Vinnie Jones, Lolita Davidovich, Mykelti Williamson, Guillermo Díaz, Dash Mihok, Michael Raymond-James, Mike Cannon, and Izabela Vidovic. The story follows the detectives of the NYPD’s Organized Crime Control Bureau as they work to dismantle the city’s most vicious and violent illegal enterprises. Det. Elliot Stabler (Meloni) returns to the force after a decade away and must rebuild his life after a devastating personal loss. Stabler’s sergeant and partner, Ayanna Bell (Truitt), leads the task force and has a long-game strategy to take them down from the inside. Observant and deceivingly smart, Jet Slootmaekers (Seiger) utilizes her tech expertise and hacking skills to give the team a leg up on striking their target.

The second season of Law & Order: Organized Crime averages a 0.54 rating in the 18-49 demographic and 3.39 million viewers in the live+same day ratings (includes all DVR playback through 3:00 AM). Compared to season one, that’s down by 32% in the demo and down by 29% in viewership in the live+same day ratings (including DVR playback through 3:00 AM). While these numbers don’t include further delayed or streaming viewing, they are a very good indicator of how a show is performing, especially when compared to others on the same channel. Though other economic factors are involved, the higher-rated shows usually get renewed and the lower-rated ones get cancelled. Find out how Organized Crime stacks up against other NBC TV shows.

What do you think? Are you glad that the Law & Order: Organized Crime TV show has been renewed for a third season? How would you feel if NBC cancelled this TV series, instead?

I don’t like this one because it never ends. It should be like the other law and order serious. I prefer an ending each episode. It just drags on and on

Elliot Stabler basically goes undercover from one crime gang to the next having this uncanny ability to infiltrate each one to the point of being top rank in mere seconds flat. Apparently he is just SO good at playing the perpetrators that they want to trust him at the drop of a hat. I am so incredibly unimpressed with all of these kingpins having a gorgeous and brilliant wife able to go above and beyond the trophy wife title, whatever. Oh, and just to increase the risk to Stabler, each one of these kingpin wives fall for him. Again, whatever.… Read more »

It’s a bit different than the other Law enforcement shows. But that’s what makes it great. Although the thing between Stabler and Benson…. But I’ve watched all Law and Order shows and sub series…

Love this show as I do all Law and Order shows. Please do not cancel.

I love this show as I do all the law and order shows. Stabler is great and so are the cast members. Please don’t cancel this show. It is a great Thursday line up with law and order the d u and then organized crime. Thank you devoted watcher.

Love,love Organized Crime starring Chris Meloni… Please renew third season. I have been checking everyday. It’s exciting.. I sometimes get bored because I can predict svu solution of the case.

Oh my goodness, PLEASE RENEW BOTH of the shows Law & Order: SVU and also the New Law & Order: Organized Crime! I’ve always watched & loved L&O: SVU and i always will! As far as the New Organized Crime, they go hand in hand, i love how Olivia & Stablers ongoing relationship through work & their personal friendship overlap between the shows. I especially love seeing more of their family life too. I love seeing Noah growing up & Olivia being such a good mom. I especially LIVE Stablers Family life but so sorry Cathy was killed.. his mom… Read more »

I always liked watching Law and Order and watching Benson and Stabler’s relationship as partners. Missed him lots when left SVU.

i love watching it, i hope they renew it, as i miss Elliot

This show is EXCELLENT. Maybe better than SVU; I feel like I’m watching something on FX or even a premium channel. I hope they renew it. I am so sick of excellent shows being canceled and crap like American Idol being on for 40 seasons. Please watch, people, you won’t regret it!

While I wasn’t interested at first, I’ve continued watching it and absolutely love it! It’s something my husband and I actually watch together. I’m hoping it gets renewed for many more seasons.