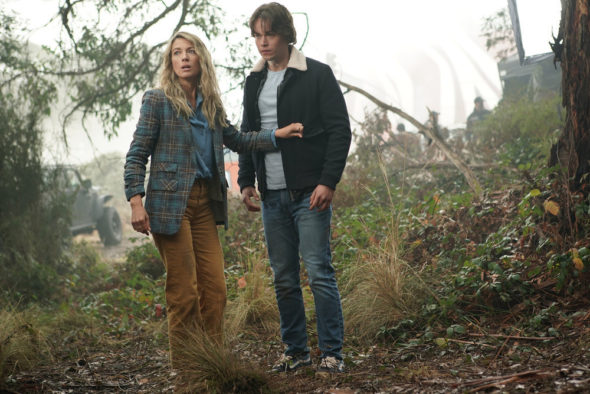 Will this show’s mysteries be solved? Has the La Brea TV show been cancelled or renewed for a second season on NBC? The television vulture is watching all the latest cancellation and renewal news, so this page is the place to track the status of La Brea, season two. Bookmark it, or subscribe for the latest updates. Remember, the television vulture is watching your shows. Are you?

Airing on the NBC television network, the La Brea TV show stars Natalie Zea, Eoin Macken, Jon Seda, Nicholas Gonzalez, Chiké Okonkwo, Karina Logue, Zyra Gorecki, Jack Martin, Veronica St. Clair, Rohan Mirchandaney, Lily Santiago, Josh McKenzie, and Chloe De Los Santos. The story begins as a massive sinkhole opens up in the middle of Los Angeles, swallowing cars and buildings and separating the Harris family between two worlds. Mom Eve (Zea), teenage son Josh (Martin), and others fall into an unexplainable primeval land. On the surface, searching for answers, there’s teen daughter Izzy (Gorecki) and Gavin (Macken), her father who has a troubled past. When Gavin realizes his visions might just be the key to finding their loved ones, time will be the only thing that stands in their way.

The first season of La Brea averaged a 0.58 rating in the 18-49 demographic and 4.94 million viewers in the live+same day ratings (including DVR playback through 3:00 AM). While these numbers don’t include further delayed or streaming viewing, they are a very good indicator of how a show is performing, especially when compared to others on the same channel. There can be other economic factors involved in a show’s fate, but typically the higher-rated series are renewed and the lower-rated ones are cancelled. Find out how La Brea stacks up against other NBC TV shows.

Will NBC cancel or renew La Brea for season two? This serial drama revolves around ongoing mysteries, ala Debris or Manifest. Typically, shows like this draw devoted but small audiences and end up struggling in the ratings before being cancelled. I think that the peacock network will give this one every opportunity to succeed. It got off to a positive start but the traditional numbers have dwindled downward. On the upside, the show does well In delayed viewing. We’ll have to wait and see how the rest of the season shakes out. I’ll update this page with breaking developments. Subscribe for free alerts on La Brea cancellation or renewal news.

What do you think? Are you glad that the La Brea TV show has been renewed for a second season? How would you feel if NBC had cancelled this TV series, instead?

LA Brea is currently running in Germany and I think the series is absolutely awesome. I am a big fan of Jon Seda. He is great in his role as Sam. I hope there will be many more seasons. This series is sensational and really something different. Greetings from Germany

I loved this show and was so disappointed when it didn’t come on. The season was way too short. Can’t wait for it to air again

La Brea is the kind of show we need!!! Fast paced sci-fy adventure. The networks are full of cop and doctor shows. Let’s keep this going for a few seasons!!!

I’m thinking that if Labrea extends to another season then that would mean that the people will never escape back to their present world in the 1st season.

La Brea is a GREAT SHOW!!!! I hope that there are many more Seasons and Episodes to come!!!!

We would feel like we’re hanging from a cliff!! Every time a great series comes on TV, it’s taken off and something stupid is put on in it’s place! PLEASE, renew La Brea.