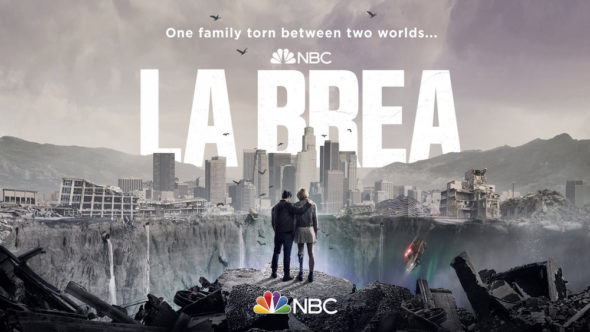 Lost was a hit show for ABC but very few other mystery serials have been a success in the ratings and most have been cancelled after just one season. How will La Brea fare for NBC? Will it be cancelled or buck the trend and be renewed for season two? Stay tuned.  *Status Update Below.

A disaster drama, the La Brea TV show stars Natalie Zea, Eoin Macken, Jon Seda, Nicholas Gonzalez, Chiké Okonkwo, Karina Logue, Zyra Gorecki, Jack Martin, Veronica St. Clair, Rohan Mirchandaney, Lily Santiago, Josh McKenzie, and Chloe De Los Santos. The story begins as a massive sinkhole opens up in the middle of Los Angeles, swallowing cars and buildings and separating the Harris family between two worlds. Mom Eve (Zea), teenage son Josh (Martin), and others fall into an unexplainable primeval land. On the surface, searching for answers, there’s teen daughter Izzy (Gorecki) and Gavin (Macken), her father who has a troubled past. When Gavin realizes his visions might just be the key to finding their loved ones, time will be the only thing that stands in their way.

What do you think? Do you like the La Brea TV series on NBC? Should it be cancelled or renewed for a second season?

Would be more watchable if everyone weren’t so clean and we’ll kempt and rather unharmed by their journey; the perfect hair and freshly bathed look of all the stranded overly breaks the fourth wall (fix of finding a movie set wardrobe trailer felt like a wet blanket). It’s like the theater doors are wide open and the house lights left fully on; show barely holds my attention as a result. I could forgive all that, if weren’t for the fact that so much creative territory seems left unexplored; the focus seems primarily on basic soap opera tropes – soap operas… Read more »