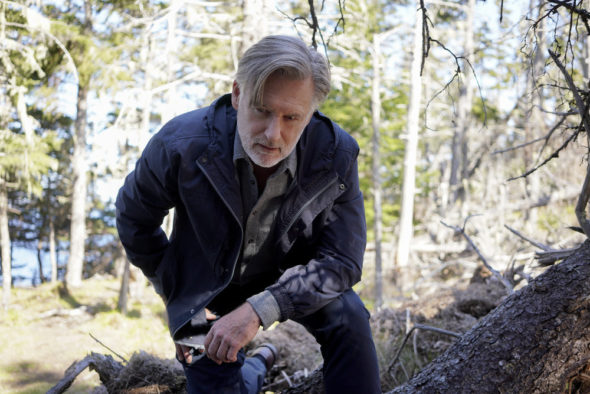 Is Harry Ambrose done this time? Has The Sinner TV show been cancelled or renewed for a fifth season on USA Network? The television vulture is watching all the latest cancellation and renewal news, so this page is the place to track the status of The Sinner, season five. Bookmark it, or subscribe for the latest updates. Remember, the television vulture is watching your shows. Are you?

Airing on the USA Network cable channel, The Sinner stars Bill Pullman, Frances Fisher, Alice Kremelberg, Neal Huff, Cindy Cheung, Ronin Wong with Jessica Hecht and Michael Mosley. Season four finds now-retired detective Harry Ambrose (Pullman) Still reeling from the trauma of a previous case a year ago. He travels to Hanover Island in northern Maine for a recuperative getaway with his partner, Sonya (Hecht). When an unexpected tragedy occurs involving the daughter of a prominent island family, Ambrose is recruited to help the investigation, only to be thrown into a mystery of mounting paranoia that will turn this sleepy tourist island, and Ambrose’s life, upside down.

The fourth season of The Sinner averaged a 0.08 rating in the 18-49 demographic and 438,000 viewers. Compared to season three, that’s down by 51% in the demo and down by 33% in viewership in the live+same day ratings (including DVR playback through 3:00 AM). While these numbers don’t include further delayed or streaming viewing, they are a very good indicator of how a show is performing, especially when compared to others on the same channel. There can be other economic factors involved in a show’s fate, but typically the higher-rated series are renewed and the lower-rated ones are cancelled. Find out how The Sinner stacks up against other USA Network TV shows.

Will USA Network cancel or renew The Sinner for season five? The channel has very few scripted originals so my sense is that, if Pullman wants to continue, the show will be renewed. The big drop in ratings is concerning, however. I’ll update this page with breaking developments. Subscribe for free alerts on The Sinner cancellation or renewal news.

What do you think? Were you hoping that The Sinner TV show would be renewed for a fifth season? Are you sorry that USA Network has cancelled this TV series, instead?

PLEASE do not cancel the show. Really enjoyed every season. Such a shame if it ends up being cancelled!

Finally a show, The Sinner that is thought provoking and has a fantastic cast! It would be a shame if this was cancelled and you continue with shows that are brainless to those of us who can tell an award winning program! Keep The Sinner for more seasons and give people a chance to enjoy something worth while!!!!

They should have figured out a way, long ago, to keep Jessica Biel for the duration of the series. They wouldn’t be losing viewership had they done that. GUARANTEED!