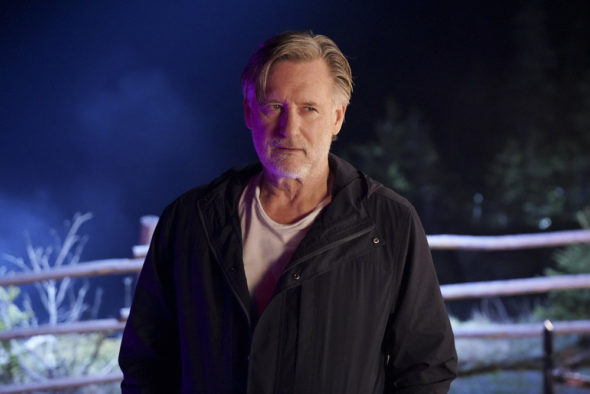 Harry Ambrose will be getting some well-earned rest. USA Network has opted to discontinue The Sinner TV show so there won’t be a fifth season. The fourth season finale, now the series finale, will air on December 1st.

A mystery crime drama series, The Sinner stars Bill Pullman, Frances Fisher, Alice Kremelberg, Neal Huff, Cindy Cheung, Ronin Wong with Jessica Hecht and Michael Mosley. Season four finds now-retired detective Harry Ambrose (Pullman) Still reeling from the trauma of a previous case a year ago. He travels to Hanover Island in northern Maine for a recuperative getaway with his partner, Sonya (Hecht). When an unexpected tragedy occurs involving the daughter of a prominent island family, Ambrose is recruited to help the investigation, only to be thrown into a mystery of mounting paranoia that will turn this sleepy tourist island, and Ambrose’s life, upside down.

Airing on Wednesday nights, the fourth season of The Sinner averages a 0.08 rating in the 18-49 demographic and 412,000 viewers. Compared to season three, that’s down by 49% in the demo and down by 37% in viewership in the live+same day ratings (including DVR playback through 3:00 AM).

With The Sinner coming to an end, USA Network seems to be finished producing original scripted series. Dirty John appears unlikely to be renewed (the last new episode aired 16 months ago), and the cable channel shares the current Chucky series with sister channel Syfy. There are unscripted shows in the works.

“It’s been a huge pleasure and a privilege to be able to tell the kind of stories we have on The Sinner these past four seasons,” said creator and executive producer Derek Simonds. “UCP and USA have been ideal partners and continually supportive of our creative goals, and I’m so pleased to complete Harry Ambrose’s dramatic series-long arc as we intended in this final season. A huge thank you to my partner-in-crime, Bill Pullman, and to the talented actors, writers, directors, and crew who gave their all to help realize this show. It’s been an incredible journey.”

What do you think? Have you kept up with The Sinner TV series? Are you sorry that this USA Network show won’t have a fifth season?

There is absolutely no reason for USA to quit making scripted shows if they are in it for the money. I doubt they will have much of an audience anymore with the drivel they have left. They expect to remain relevant with that crap? Goodbye forever, USA! You have lost me and thousands of others. Tell your execs who made this idiotic decision that they better start looking for work elsewhere because your revenue is going to fall into the red so fast you won’t know what hit you, and USA will be nothing more than a bad memory!

Another quality show bites the dust. And the dross keeps getting renewed.

I really liked this seasons show. I wasn’crazy about last years, but this season it’s really good.I thought it was right up there with Mar of East Town from HBO.

Same. Last season was a bit over the top but this season has been awesome so far. Shame they cancelled it.

I’m sorry to see it go! I enjoyed the mystery and Bill Pullman, was looking forward to watching every week.

Another great show bites the dust…So many over the years. Too, too, sad..

Why do the good shows have to go. Bill Pullman has been excellent actor and I will miss him and the show.

This is a terrible. I am so sad not to see this anymore… Please make more of them! I love this show…. I will miss him…