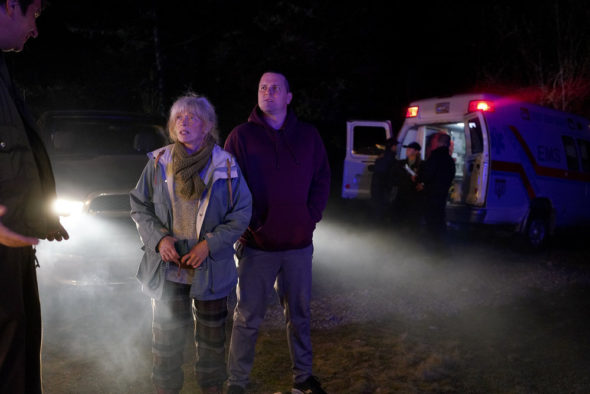 Will Harry get some relaxation in the fourth season of The Sinner TV show on USA Network? As we all know, the Nielsen ratings typically play a big role in determining whether a TV show like The Sinner is cancelled or renewed for season five. Unfortunately, most of us do not live in Nielsen households. Because many viewers feel frustrated when their viewing habits and opinions aren’t considered, we invite you to rate all of the fourth season episodes of The Sinner here.  *Status Update Below.

A USA Network mystery crime drama, The Sinner stars Bill Pullman, Frances Fisher, Alice Kremelberg, Neal Huff, Cindy Cheung, Ronin Wong with Jessica Hecht and Michael Mosley. Season four finds now-retired detective Harry Ambrose (Pullman) Still reeling from the trauma of a previous case a year ago. He travels to Hanover Island in northern Maine for a recuperative getaway with his partner, Sonya (Hecht). When an unexpected tragedy occurs involving the daughter of a prominent island family, Ambrose is recruited to help the investigation, only to be thrown into a mystery of mounting paranoia that will turn this sleepy tourist island, and Ambrose’s life, upside down.

What do you think? Which season four episodes of The Sinner TV series do you rate as wonderful, terrible, or somewhere between? Do you think that The Sinner should be cancelled or renewed for a fifth season on USA Network? Don’t forget to vote, and share your thoughts, below.