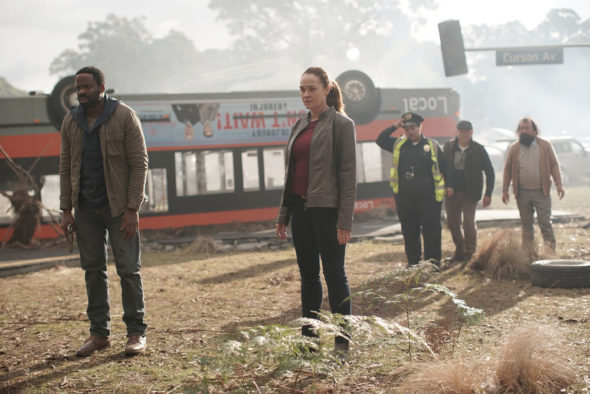 The mysteries will continue for the Harris family in the 2022-23 TV season. After just seven episodes, the La Brea series has been renewed for a second season on NBC. While this is the network’s first new show to be renewed, we already know that scripted shows Chicago Fire, Chicago Med, Chicago PD, Law & Order: SVU,  and New Amsterdam will also be back, thanks to previous multi-season renewals.

A drama series, the La Brea TV show stars Natalie Zea, Eoin Macken, Jon Seda, Nicholas Gonzalez, Chiké Okonkwo, Karina Logue, Zyra Gorecki, Jack Martin, Veronica St. Clair, Rohan Mirchandaney, Lily Santiago, Josh McKenzie, and Chloe De Los Santos. The story begins as a massive sinkhole opens up in the middle of Los Angeles, swallowing cars and buildings and separating the Harris family between two worlds. Mom Eve (Zea), teenage son Josh (Martin), and others fall into an unexplainable primeval land. On the surface, searching for answers, there’s teen daughter Izzy (Gorecki) and Gavin (Macken), her father who has a troubled past. When Gavin realizes his visions might just be the key to finding their loved ones, time will be the only thing that stands in their way.

Airing on Tuesday nights, the first season of La Brea averages a 0.60 rating in the 18-49 demographic and 5.08 million viewers in the live+same day ratings (including DVR playback through 3:00 AM). In the traditional ratings, the series has been a middle-of-the-road performer. In the live+7 day delayed viewing, La Brea is averaging a 0.98 in the demo with 7.93 million, gaining 64% and 56%, respectively.

Here’s NBC’s announcement about the renewal:

• NBC has renewed its hit Tuesday drama “La Brea” for a second season.

• “La Brea” is the #1 new program this fall in the 18-49 demo and the series has reached more than 47 million viewers across linear and digital platforms.

• “La Brea” is produced by Universal Television, a division of Universal Studio Group, in association with Keshet Studios.

Check out our NBC status sheet to track the peacock network’s new series pickups, renewals, and cancellations. You can find lists of cancelled shows here.
What do you think? Are you glad to hear that the La Brea TV series has already been renewed for a second season? Will you continue to watch this NBC show?

nbc is trying to get more viewers with 1 more season, so they can enjoy cancelling it for a season 3! nbc has a sadistic side , just ask the manufest fans! i cant understand how netflix was stupid enough to pick uo manifest after it was GONE!

Love it. Can’t wait till it’s back on.