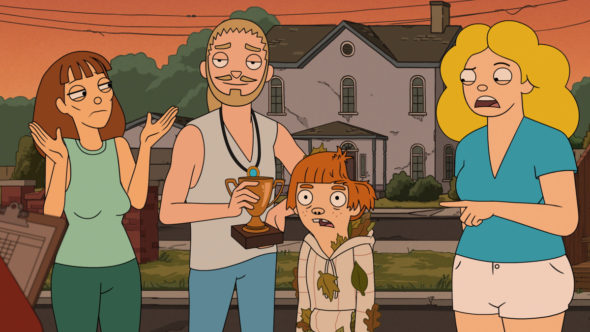 A Paramount+ adult animated comedy series, The Harper House TV show stars Rhea Seehorn, Jason Lee, Tatiana Maslany, and Ryan Flynn with Gabourey Sidibe, Gary Anthony Williams, Nyima Funk, VyVy Nguyen, Lance Krall, Chris Diamantopoulos, and Joanna Hausmann. Debbie (Seehorn) is the overconfident female head of the Harper household. After losing her high-paying job, Debbie and her family must move to the poor side of an Arkansas small town and the historic Harper House, an inherited Victorian fixer-upper. Her husband, Freddie (Lee), is a stay-at-home helicopter dad, and their twin children are optimistic daughter Ollie (Maslany) and potty-mouthed son Todd (Flynn), an intellectual. Will this family of oddballs be able to fit in?

What do you think? Which season one episodes of The Harper House TV series do you rate as wonderful, terrible, or somewhere between? Do you think that The Harper House on Paramount+ should be cancelled or renewed for a second season? Don’t forget to vote and share your thoughts below.