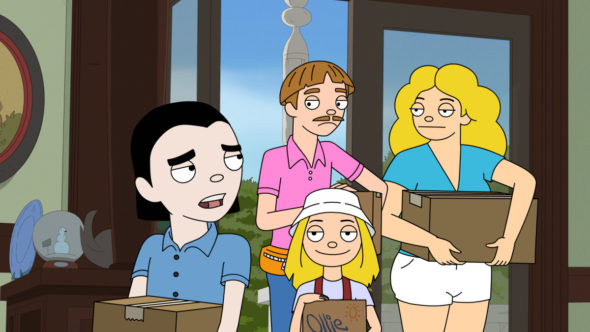 The Harper family is moving out after just one year. Paramount+ has cancelled The Harper House so there won’t be a second season. The first season of 10 episodes just finished being released last week.

An adult animated comedy series, The Harper House TV show stars Rhea Seehorn, Jason Lee, Tatiana Maslany, and Ryan Flynn with Gabourey Sidibe, Gary Anthony Williams, Nyima Funk, VyVy Nguyen, Lance Krall, Chris Diamantopoulos, and Joanna Hausmann. Debbie (Seehorn) is the overconfident female head of the Harper household. After losing her high-paying job, Debbie and her family must move to the poor side of an Arkansas small town and the historic Harper House, an inherited Victorian fixer-upper. Her husband, Freddie (Lee), is a stay-at-home helicopter dad and their twin children are optimistic daughter Ollie (Maslany) and potty-mouthed son Todd (Flynn), an intellectual. Will this family of oddballs eventually be able to fit in?

Series creator Brad Neely revealed the cancellation via his Twitter account and wrote, “The Harper House is cancelled. I’ll always appreciate the show’s resilient crew and cast that came together during an unprecedented breakdown of normal life to make this family with me. I’m grateful to everyone involved and to anyone who gave it a shot. It’s time to get nuts”

You’re a real one, Joanna. Lokking forward to calling you for the next one!

Check out our status sheets to track new TV series pickups, renewals, and cancellations. You can find lists of cancelled shows here.
What do you think? Have you watched The Harper House animated series on Paramount+? Are you sorry to hear that this adult comedy won’t return for a second season?

I think The Harper House has so far been funny and interesting. In my opinion the show should be given more of a chance with a second season. By that point the shows future would be a lot clearer.