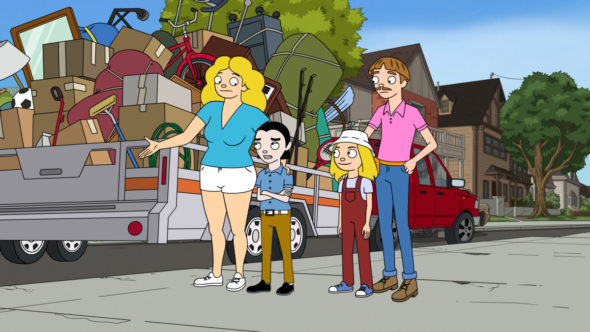 Are the Harpers here to stay? Has The Harper House TV show been cancelled or renewed for a second season on Paramount+? The television vulture is watching all the latest cancellation and renewal news, so this page is the place to track the status of The Harper House, season two. Bookmark it, or subscribe for the latest updates. Remember, the television vulture is watching your shows. Are you?

Streaming on the Paramount+ subscription service, The Harper House TV show stars Rhea Seehorn, Jason Lee, Tatiana Maslany, and Ryan Flynn with Gabourey Sidibe, Gary Anthony Williams, Nyima Funk, VyVy Nguyen, Lance Krall, Chris Diamantopoulos, and Joanna Hausmann. Debbie (Seehorn) is the overconfident female head of the Harper household. After losing her high-paying job, Debbie and her family must move to the poor side of an Arkansas small town and the historic Harper House, an inherited Victorian fixer-upper. Her husband, Freddie (Lee), is a stay-at-home helicopter dad and their twin children are optimistic daughter Ollie (Maslany) and potty-mouthed son Todd (Flynn), an intellectual. Will this family of oddballs be able to fit in?

Unless they decide to publicize viewership, it is difficult to predict whether Paramount+ will cancel or renew The Harper House for season two. Since Paramount+ isn’t ad-supported, it can take a chance on series it believes in, but sooner or later it comes down to production costs, versus viewership numbers. Animated comedies are less expensive to produce than live-action ones so I think this series has a good chance of being renewed. I’ll keep my ears open and an eye out for news, and will update this page with breaking developments. Subscribe for free alerts on The Harper House cancellation or renewal news.

11/14/21 update: The Harper House has been cancelled by Paramount+.

What do you think? Were you hoping that The Harper House TV show would be renewed for a second season? Are you sorry that Paramount+ cancelled this TV series, instead?