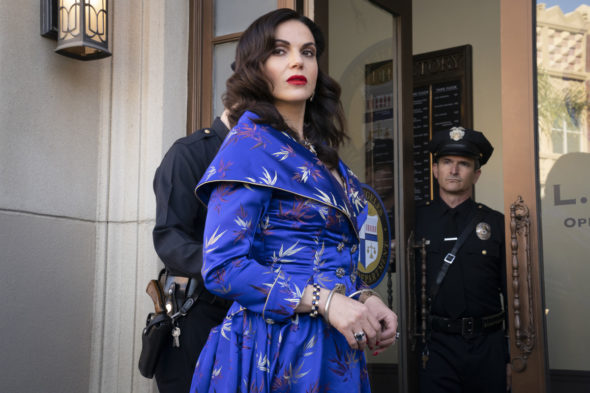 How will Alma’s story end? Has the Why Women Kill TV show been cancelled or renewed for a third season on Paramount+? The television vulture is watching all the latest cancellation and renewal news, so this page is the place to track the status of Why Women Kill, season three. Bookmark it, or subscribe for the latest updates. Remember, the television vulture is watching your shows. Are you?

Streaming on the Paramount+ subscription service, Why Women Kill is a darkly comedic anthology drama from Marc Cherry. Season two stars Allison Tolman, Lana Parilla, B.K. Cannon, Jordane Christie, Matthew Daddario, Veronica Falcón, and Nick Frost. The second season’s story takes place in 1949 and explores what it means to be beautiful, the hidden truth behind the facades people present to the world, the effects of being ignored and overlooked by society, and finally, the lengths one woman will go in order to finally belong.

Unless they decide to publicize viewership, it is difficult to predict whether Paramount+ will cancel or renew Why Women Kill for season three. Since Paramount+ isn’t ad-supported, it can take a chance on series it believes in, but sooner or later it comes down to production costs, versus viewership numbers. Given that this anthology series comes from Marc Cherry, I’m leaning toward a renewal. I’ll keep my ears open and an eye out for news, and will update this page with breaking developments. Subscribe for free alerts on Why Women Kill cancellation or renewal news.

12/16/21 update: Why Women Kill has been renewed for a third season on Paramount+.

What do you think? Are you glad that the Why Women Kill TV show has been renewed for a third season? How would you feel if Paramount+ had cancelled this TV series, instead?

Please don’t cancel…it’s the only drama I let in my life and it’s fantastic!!!!

I certainly hope it doesn’t get canceled, one of the best shows I’ve seen in years, and I can never predict what will happen next, I try, but I’m never right, the surprises just keep coming.

They better not cancel it! I think I am up to 8 of the shows I watch now canceled! So sick of this. What else to do during these times while staying safe!