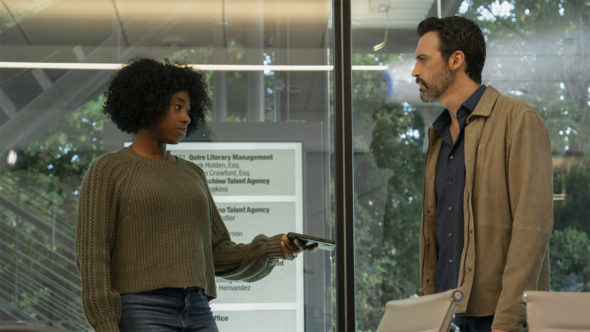 CBS All Access is going on a killing spree. The streaming service just announced they’ve renewed Why Women Kill for a second season.

CBS All Access hasn’t yet announced a premiere date for season two of Why Women Kill, but you can read more info below:

“WHY WOMEN KILL has had a phenomenal first season,” said Julie McNamara, EVP of Original Content, CBS All Access. “Under the creative direction of Marc Cherry and the incredible performances of the cast, the series has become one of our most streamed original series. We look forward to bringing fans even more of this wonderfully soapy dramedy in its second season and can’t wait to see what themes Marc explores next.”

WHY WOMEN KILL examines how the roles of women have changed over the decades, but how their reaction to betrayal… has not. The first season of WHY WOMEN KILL details the lives of three women living in three different decades: a housewife in the ‘60s, a socialite in the ‘80s and a lawyer in 2019, each dealing with infidelity in their marriages. Season two will follow a new set of characters dealing with acts of betrayal.

What do you think? Have you seen Why Women Kill? Will you watch season two?

This show is really interesting. Hoping there is season 2.. I will definitely be watching if there was season 2

Yes I will definitely watch season 2 of Why Women Kill!!!! the first season was spectacular!

Fabulously entertaining and fun. The final episode of Season 1 was especially creative and I concur with Jennifer Lovell’s comments below. Please let us know what day Season 2 will start… can’t wait !!

The whole season was phenomenal and I will definitely watch season 2!!!

Any idea when season 2 will be released? The season finale was incredible! Watching all 3 stories unfold at once was exciting and I thought a very witty, clever idea on Marc Cherry’s part. Can’t wait for season 2!

That’s what I’m trying to figure out