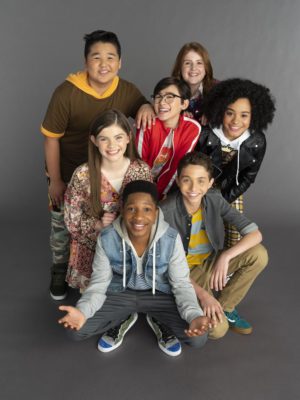 Nickelodeon is all in for All That. The network just announced they’ve ordered more episodes of the TV show reboot.

Nickelodeon has ordered 13 more episodes of All That and added new castmember Aria Brooks. You can read more info below:

BURBANK, Calif. – Oct. 16, 2019 – Nickelodeon has picked up an additional 13 episodes of ’90s icon All That, bringing its first season total to 26 episodes. Also announced today, is new cast member Aria Brooks from Atlanta, Ga., who is joining the show’s talented and diverse cast of comedians. New episodes of All That air on Saturdays at 8:30 p.m. (ET/PT) on Nickelodeon.

All That was Nickelodeon’s longest running live-action series with 171 episodes across 10 seasons from 1994 to 2005. The franchise paved the way for a number of successful spinoffs including Kenan & Kel, The Amanda Show and The Nick Cannon Show, and the feature-length film Good Burger, as well as audio recordings, books, festival tours, and numerous reunions celebrating the show’s impact on pop culture.

All That helped launch the careers of comedy stars including Kenan Thompson, Amanda Bynes and Nick Cannon, and has featured musical guests and guest stars including Britney Spears, Justin Timberlake, Usher, Ray Romano and Brittany Snow.

Production of All That for Nickelodeon is overseen by Shauna Phelan, Senior Vice President, Live-Action Scripted Content. All That was created by Brian Robbins and Mike Tollin.”

What do you think? Have you seen the new All That? Are you glad there’ll be more episodes?

I change the channel every time this show comes on. The original show was the best. These kids are not funny at all. A wast of time.