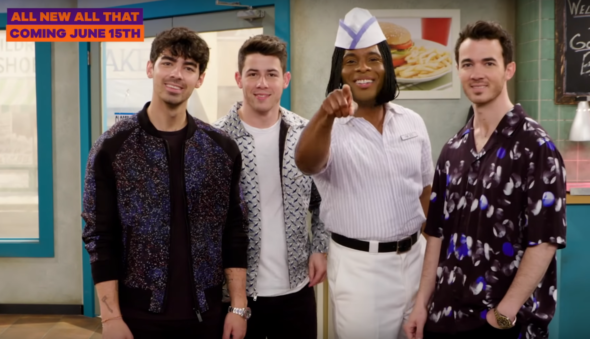 Are you ready for the return of All That? Nickelodeon just announced the TV show revival will premiere in June.

The new version of the comedy sketch series will feature “appearances from legacy cast members Kel Mitchell, Lori Beth Denberg and Josh Server, who helped make the original series a 90s icon for an entire generation of kids.” The Jonas Brothers are slated to perform on the premiere.

BURBANK, Calif. – May 14, 2019 – Nickelodeon’s brand-new version of its legendary sketch comedy series, All That, returns on Saturday, June 15, at 8:30 p.m. (ET/PT), with an all new cast and performance by Grammy(R) nominated multiplatinum powerhouse Jonas Brothers. The premiere also features appearances from legacy cast members Kel Mitchell, Lori Beth Denberg and Josh Server, who helped make the original series a 90s icon for an entire generation of kids. Executive produced by original cast member Kenan Thompson, All That will air weekly on Saturdays at 8:30 p.m. (ET/PT) on Nickelodeon.

As the countdown to the premiere begins, the show opens with Mitchell, Denberg and Server imparting advice and words of wisdom to the new cast of All That sharpens their comedic skills. Coming this season, classic roles are reprised in some of the series’ most memorable sketches including: Mitchell as fast-food slacker “Ed” in “Good Burger”, Denberg dropping some hilarious new advice in “Vital Information” and appearing as “Ms. Hushbaum,” the hypocritical “Loud Librarian”. The new cast and additional guest stars will be announced at a later date.

The Jonas Brothers will close the show with a performance of their smash hit “Sucker,” which debuted at number one on the Billboard Hot 100 and the US Hot Digital Songs chart.

Shot in front of a live studio audience, this season All That will introduce an all-new cast of kids to a new generation of fans, along with original comedic sketches, beloved ones, new characters and impersonations of today’s popular celebrities. Each new episode will also feature a musical performance from today’s top artists, and guest stars from the worlds of TV, film, comedy and more.

All That was Nickelodeon’s longest running live-action series with 171 episodes across 10 seasons from 1994 to 2005. The franchise paved the way for a number of successful spinoffs including Kenan & Kel, The Amanda Show and The Nick Cannon Show, the feature-length film Good Burger, as well as audio recordings, books, festival tours, and numerous reunions celebrating the show’s impact on pop culture.

All That helped launch the careers of comedy stars including Kenan Thompson, Amanda Bynes and Nick Cannon, and has featured musical guests and guest stars including Britney Spears, Justin Timberlake, Usher, Ray Romano and Brittany Snow. All That was created by Brian Robbins and Mike Tollin.

What do you think? Did you watch the original All That? Will you check out the revival?