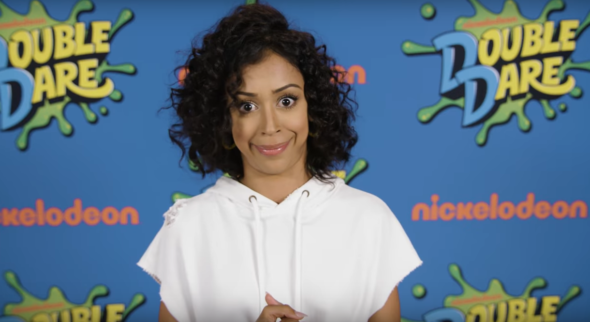 Double Dare is back in action. Recently, Nickelodeon announced the host and the premiere date for their upcoming TV show revival.

The reboot will be hosted by Liza Koshy and feature the return of original host Marc Summers, who will give “color commentary on the challenges, lending his vast knowledge of the game and expertise to each episode.”

BURBANK, Calif.-May 22, 2018-Get ready for a summer full of Double Dare, as Nickelodeon sets Monday, June 25, at 8:00 PM (ET/PT) as the premiere date for the iconic game show’s return. Digital creator and actress Liza Koshy has been tapped to host the brand-new version of Double Dare, where a new generation of fans will compete in the messiest and most physically challenging competition of their lives.

Bringing together new fans and the iconic game show’s millennial audience from the ’90s, original series host Marc Summers returns to give color commentary on the challenges, lending his vast knowledge of the game and expertise to each episode.

Said Koshy, “This is a dream that I have been dreaming to live! From watching Double Dare to hosting it!? I am ready for a summer of slime and nose picking.”

Said Summers, “I can’t think of many shows like Double Dare that have the ability to bond people together–those who grew up watching the original series can now pass along their love for this game show to today’s kids. It’s an honor to be a part of this reboot.”

Nickelodeon’s new Double Dare will also spill off of the screen and into the real world this summer, connecting to fans both old and new in a series of forthcoming location-based live experiences. There will be opportunities for fans to play Double Dare in on-the-ground versions at VidCon 2018 in Anaheim, Calif., and all summer long at Nickelodeon Universe at Mall of America in Minneapolis.

Double Dare premiered on Oct. 6, 1986, on Nickelodeon, and ran from 1986-1993, making it the network’s longest running game show. Marc Summers served as the show’s original host from 1986-1993. Shortly after its debut, Double Dare became one of the most popular original daily programs on cable television. The series went into syndication in 1988, and was later revived as Super Sloppy Double Dare in 1989. The show also ran on broadcast television as Family Double Dare in 1988, followed by new versions on Nick, including Double Dare 2000.

What do you think? Are you a fan of the original Double Dare? Will you watch the reboot?

The reboot will be hosted by Liza Koshy.