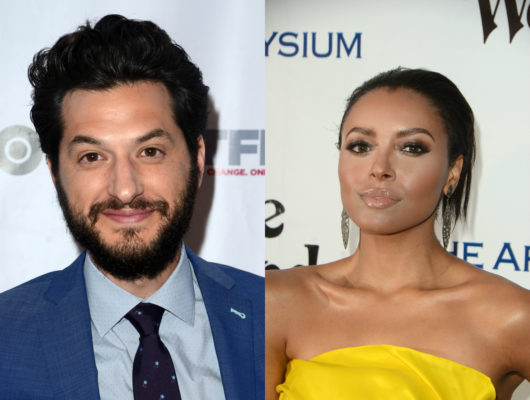 The animated series will follow “the band of brothers as they encounter new allies and villains and discover a mystical world they never knew existed beneath the streets of New York City.” The voice cast includes Omar Miller as Raphael, Ben Schwartz (pictured, left) as Leonardo, Josh Brener as Donatello, Brandon Mychal Smith as Michaelangelo, and Kat Graham (pictured, right) as April O’Neil.

Rise of the Teenage Mutant Ninja Turtles is expected to premiere on Nickelodeon in 2018.

BURBANK, Calif. – Nov. 2, 2017 – Nickelodeon today announced the voice cast of its all-new series, Rise of the Teenage Mutant Ninja Turtles, a reimagining that follows the band of brothers as they encounter new allies and villains and discover a mystical world they never knew existed beneath the streets of New York City. The 2D-animated series stars the voice talent of Omar Miller (Ballers) as Raphael, Ben Schwartz (Parks and Recreation) as Leonardo, Josh Brener (Silicon Valley) as Donatello, Brandon Mychal Smith (You’re The Worst) as Michelangelo and Kat Graham (The Vampire Diaries) as April O’Neil. The series is set to debut in 2018 on Nickelodeon.

“This incredible roster of voice actors provides a fresh take on these globally recognized characters, and they are going to bring this version of the Turtles to life in a whole new way,” said Chris Viscardi, Senior Vice President, Production and Development, Animation. “We have reimagined the series to be filled with humor, loads of action and a dynamic look, and it’s packed with all new heroes, villains and cityscapes for the Turtles to explore.”

The highly comedic voice cast shapes the team in a fresh way and breathes new life into the characters’ distinct personalities, including: Raphael, as the oldest and physically biggest brother, he is now the leader and his enthusiasm and bravado puts him front and center for most of their bizarre adventures; Leonardo, the self-professed ‘coolest’ brother possesses irreverent charm and a rebel heart; Donatello, an unflappable mechanical genius and tech wizard whose ninja skills are second only to his coding; Michelangelo, the youngest brother, an artist and awesome skateboarder with a wild colorful, and imaginative personality; and the Turtles’ most trusted ally, April O’Neil, a street savvy native New Yorker who is always ready to join in the fun. Additionally, Eric Bauza (Teenage Mutant Ninja Turtles) joins the cast as Splinter, both father figure and sensei to the Turtles.

Veteran animation industry voice actor Rob Paulsen is voice directing the series. Paulsen most recently voiced Donatello in Nickelodeon’s CG-animated series Teenage Mutant Ninja Turtles, and voiced Raphael in the 1987 original series. With over 2,000 half-hours of animation voice-over to his credit, Paulsen’s versatility is heard in many series.

Rise of the Teenage Mutant Ninja Turtles follows Raphael, Leonardo, Donatello and Michelangelo on all-new adventures as they seek to unlock the mystical secrets of New York City. From the tallest skyscraper to the dankest sewer drain, the Turtles will encounter absurd new mutants and battle bizarre creatures all while enjoying their favorite slice of pizza. Tapping into mystic, ninja powers they never knew existed, the four brothers must learn to work together and navigate the perils of the modern age and hidden realms in order to fulfill their destiny to become a team of heroes.

What do you think? Are you a Teenage Mutant Ninja Turtles fan? Will you watch the new TV show?