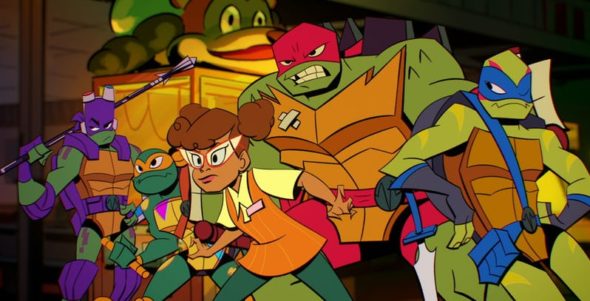 Apparently, good things come in pairs. Today, Nickelodeon announced that their Rise of the Teenage Mutant Ninja Turtles and Knight Squad TV shows have each been renewed for second seasons.

The cable channel aired a sneak peek of the new animated Ninja Turtles series on July 20th but season one won’t begin airing regularly until September 17th. There are 26 installments in the first season and they’ve ordered another 26 episodes for season two.

Here are the pertinent portions of Nickelodeon’s press release:

Nickelodeon, the number-one network for kids, announced today that Rise of the Teenage Mutant Ninja Turtles, the reimagined 2D-animated series, has been greenlit for a second season with 26 episodes. The action-comedy follows the band of brothers, Raph, Leo, Donnie and Mikey, as they discover new powers and encounter a mystical world they never knew existed beneath the streets of New York City. Season two will begin production this fall at Nickelodeon’s headquarters in Burbank, Calif.

Rise of the Teenage Mutant Ninja Turtles season one will debut on Monday, Sept. 17, with the global rollout set to premiere this fall across Nickelodeon’s channels and branded blocks in 170+ countries and territories. The all-new original animated series follows the Turtles on different adventures as they master new powers, encounter absurd mutants and battle bizarre villains, each with their own motivations. Ranging from mystics, mutants and madmen, new creatures and villains emerge to take on the brothers in battles across New York City.

The announcements were made at the 2018 Television Critics Association press tour held at the Beverly Hilton Hotel in Los Angeles.
…

What do you think? Do you like the Knight Squad TV show? Have you checked out Rise of the Teenage Mutant Ninja Turtles yet? Are you glad that these two shows are returning for second seasons?

Rise of the TNMT has been awesome! The fight scenes are well choreographed and the extremes angles create really nice movement. It’s been fun learning more about Splinter’s backstory and April has so much wonderful energy! I really really love watching the animation for the show!

I watched the preview episode of the Tale of the Teenage Mutant Ninja Turtles the other day. Absolutely hated it! I hate the way they are drawn, they made Master Splinter look fat and lazy, and it was not good, in my opinion.

Why bother. The best TMNT from Nick would be the 2012 version. Loved all the 5 seasons. The Rise… two thumbs down and a colored April O’Neil? What’s wrong if she’s white?