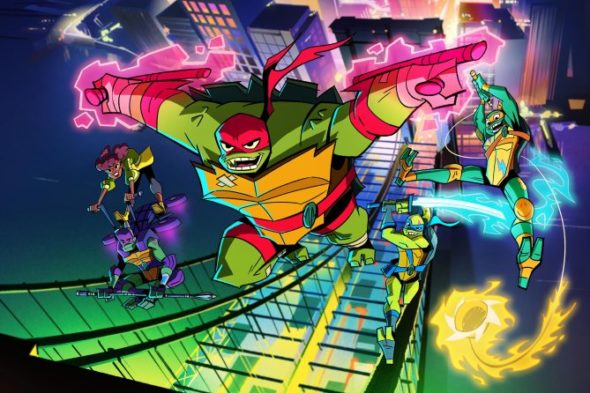 Are you ready for Rise of the Teenage Mutant Ninja Turtles? Today, Nickelodeon released a first look (see above) at their upcoming TV show.

A reimagining of the Teenage Mutant Ninja Turtles franchise, the new animated series “follows the band of brothers as they discover new powers and encounter a mystical world they never knew existed beneath the streets of New York City.”

Rise of the Teenage Mutant Ninja Turtles is slated to debut on Nickelodeon later this year.

BURBANK, Calif. – Feb. 1–Nickelodeon today revealed a first-look of the characters in its brand-new animated series, Rise of the Teenage Mutant Ninja Turtles, which follows the band of brothers as they discover new powers and encounter a mystical world they never knew existed beneath the streets of New York City. The 2D-animated series debuts later this year on Nickelodeon.

Rise of the Teenage Mutant Ninja Turtles reimagines the characters in a fresh new way, featuring jagged-shelled Raphael as a snapping turtle, wielding twin tonfas as his weapons; Leonardo as a red-eared slider, using an odachi sword; Donatello as a soft-shell turtle, sporting a tech-bo staff; and Michelangelo as a box turtle, arming himself with a kusari-fundo. Along for the adventure is the Turtles’ most trusted ally, April O’Neil, a street savvy native New Yorker and Splinter, father figure and sensei to the Turtles.

The Turtles’ hold distinct personality traits and skills, including: Raphael, as the oldest and biggest brother, he is the leader full of enthusiasm and bravado; Leonardo, the self-professed ‘coolest’ brother possesses irreverent charm and a rebel heart; Donatello, a mechanical genius and tech wizard whose ninja skills are second only to his coding; and Michelangelo, the youngest brother, a skateboarder and artist who is wild and imaginative.

Viewers can visit the Rise of the Teenage Mutant Ninja Turtles page on Nick.com for more information and follow @TMNT for Turtle Power updates. The character art was revealed today on Facebook Live.

Considered one of the most popular kids’ television programs of the 1980s, Teenage Mutant Ninja Turtles is a classic, global property created in 1984 by Kevin Eastman and Peter Laird. It first debuted as a successful comic book series and then became a hit animated TV show, a live-action television series and later spawned numerous blockbuster theatrical releases. The property is a global consumer products powerhouse, winning in every category that has hit shelves to date – with toys, apparel, video games, DVDs and more – and generating billions of dollars at retail. Teenage Mutant Ninja Turtles has been the number-one action figure for the past three years and the franchise is a previous recipient of the Toy Industry Association’s top honor for Property of the Year at the TOTY Awards.”

What do you think? Are you a fan of Teenage Mutant Ninja Turtles? Will you watch the new Nickelodeon series?

Great job Nickelodeon, a poorly rendered 2D cartoon that tries too hard to resemble the last two movies, and takes everything we know and love and flushes it down the crapper.

Holy ****, what did they do to the ninja turtles?! Shredder was supposed to be the villain, not Nickelodeon! Jesus christ.

the only glaring i see with the series is Raphael being the leader because:
1. April was supposedly black anyway
2. Michelangelo had his weapon changed before because of censorship issues
3. Raphael wielded a different weapon as the Nightwatcher

April O’Neil ain’t black. She’s white caucasian. And I don’t see any issues if she’s white. If this keeps up, next TMNT reboot series, make sure she’s Asian with a name like April Ng Oh Nee (Chinese) or April Oh-Nee (Korean)