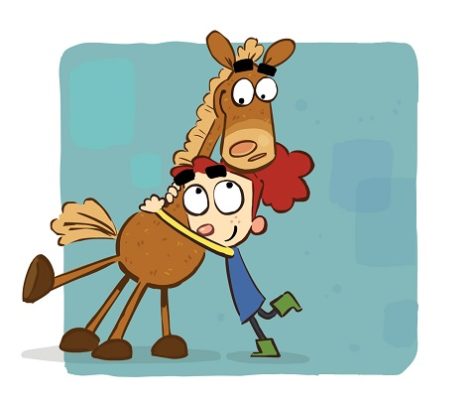 The animated series “follows the life of an average girl, Annie, her (almost) average family and what happens when an excitable, unpredictable, loveable and talking pony comes to live with them in their city apartment.”

Nickelodeon has ordered 20 episodes of Pony. A premiere date has not yet been announced, but you can read more details below:

NEW YORK — Nickelodeon today announced a 20-episode order for Pony, an original 2D-animated buddy comedy that follows the life of an average girl, Annie, her (almost) average family and what happens when an excitable, unpredictable, loveable and talking pony comes to live with them in their city apartment. Pony is the first animated comedy series to be greenlit for the U.S. from Nickelodeon International. Created by Ant Blades, Pony is based off a short of the same name from Nickelodeon’s 2015 International Animated Shorts Program.

Pony follows Annie’s everyday life as a 9-year-old, from working at her parent’s city farm, located on their apartment balcony, homework, school friends and, most importantly, her friendship with Pony. Pony is Annie’s biggest cheerleader and best friend, although sometimes his optimism and enthusiasm lands the pair in unusual situations.

Ant Blades started his creative career writing and drawing for the cartoon strip Bewley. After his short stint as an animator, Blades worked for years in the digital creative industry before moving back to the animation field and setting up Birdbox, a studio that produces commercials, on-air spots and funny short films.

Nickelodeon’s International Animated Shorts Program is now a monthly themed outreach effort for original and funny content to fuel its dynamic development slate. Concepts for the program are received in all animation styles from 2D, digital 2D, stop motion, CG and mixed media. Finalists are provided with the necessary artistic and production support to help them complete their fully animated original, humor-based and character-driven short.

Nickelodeon, now in its 38th year, is the number-one entertainment brand for kids. It has built a diverse, global business by putting kids first in everything it does. The company includes television programming and production in the United States and around the world, plus consumer products, digital, recreation, books and feature films. Nickelodeon’s U.S. television network is seen in more than 90 million households and has been the number-one-rated kids’ basic cable network for 22 consecutive years. Nickelodeon and all related titles, characters and logos are trademarks of Viacom Inc. (NASDAQ: VIA, VIAB).”

What do you think? Are you a fan of Nickelodeon? Does Pony sound interesting?